Born in Toledo, Ohio in 1931, Teresa Brewer began singing professionally at the age of two and had her first million-selling record, Music, Music, Music, before she was 16.

It all began when Teresa was playing regularly on Uncle August’s Kiddie Show, on WSPD radio in Toledo. At five she was touring with Major Bowes’ Amateur Hour, and by the time she was 12 she was an established singer on The Pick and Pat Show.

She went on to top the charts with such hits as Gonna Get Along Without Ya Now and Into Each Life Some Rain Must Fall.

Her other hits include Ricochet Romance, A Sweet Old-Fashioned Girl and Music Music Music.

She sang with Tony Bennett and had a burgeoning film career before scaling back her work to raise a family.

She re-emerged in the 1970s to perform with jazz greats Duke Ellington, Dizzy Gillespie and Wynton Marsalis.

Teresa Brewer died at her home in New Rochelle, New York in October 2007, of a neuromuscular disease. She was 76. 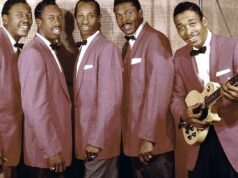 "How much blacker could it be? None, none more black." Documentary maker Marty DiBergi (Rob Reiner) goes on the road with ageing British heavy metal...

Born in Memphis on 9 June 1929, Johnny Ace (real name John Marshall Alexander Jr) returned from service in the US Navy during WWII...

Australian band Huxton Creepers formed while the members were still at High School in Melbourne, taking their name from a character in an obscure...

Lincolnshire band The Casuals formed in 1961. They were the outright winners of Opportunity Knocks for three consecutive weeks in 1965 and were immediately signed...