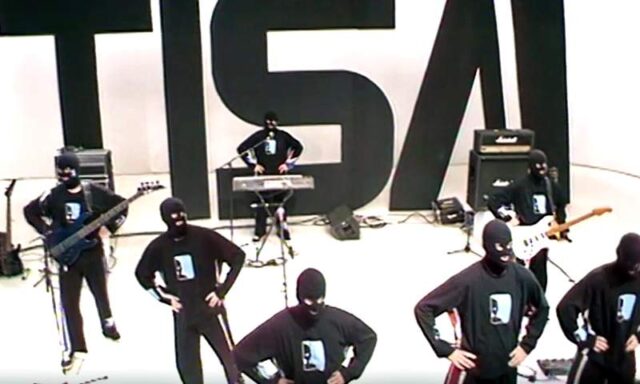 Masters of disguise for over 15 years, the seven individuals who make up TISM never revealed their faces nor their identities – save to a very select few who remained ridiculously loyal.

With such costumes as four-foot-high face-covering Louis XIV wigs, six-foot helium inflated, condom-like sheaths and, of course, their trademark balaclavas, TISM have shocked and humoured audiences with foot-tapping melodies, catch-cry lyrics and more than 20 ways to hide their faces . . . and sometimes just their faces.

Formed in 1982, TISM – or This Is Serious Mum – proceeded to write over 100 songs (or so their press release boasted), instantly discarding them due to lack of interest. Later in 1983, in a single show, they performed both their debut and farewell gig.

18 months later, their recording output began with the single Defecate On My Face (1986) – A song inspired by the alleged sexual inclinations of Adolf Hitler and Eva Braun.

Their first EP, Form And Meaning Reach Ultimate Communion, came out a couple of months later. Their first album (a double LP), Great Trucking Songs Of The Renaissance, was released in 1988 and featured such singles as The Ballad Of John Bonham’s Coke Roadie and I’m Interested In Apathy.

Their second double album, Hot Dogma, came out in 1990 on Phonogram – their first release on a major label. Interestingly, the song titles were printed in Chinese and equally interestingly, the following year TISM were sacked by Phonogram. Undaunted, the band continued to build their live audiences, with their stage show approaching legendary status.

Their antics ranged from roasting a pig on a spit to covering a venue’s scaffolding with a wild array of drying laundry (replacing the on-stage amps with stacks of washing machines and clothes dryers while a group of elderly women ironed clothes).

TISM set out to satirize the rock industry, succeeding both artistically and, ultimately, financially, when in 1995 they finally struck gold with Machiavelli And The Four Seasons.

Both loved and hated within the music industry, many attempts by music journalists to garner some sanity from TISM all invariably failed. Such was the time when TISM gave a live radio interview responding to questions via writing answers on slips of paper.

Or when they gave an interview in the middle of a football field via a megaphone, answering questions only when the 50 metres of string between the band and the journalists was stretched tightly.

Perhaps TISM’s greatest piece of journalistic sabotage was when an unsuspecting and ill-clad writer was taken blindfolded into a huge meat freezer. Three well-clad members of the band duly answered his questions in all seriousness as the desperate writer ran frantically around the room, shouting his questions at the band in the minus 20 degrees mist.

Having grown out of the obscure mod rock band The Bunch of Fives, The Tickle were one of the numerous British bands to release...

This American heavy rock band was formed in 1980 in Los Angeles by vocalist Stephen Pearcy and guitarist Robbin Crosby. Pearcy's first band had been...

Before Punk came along, Edinburgh art college students Alan Forbes and John Callis were in R&B covers band The Knutsford Dominators. Their 1976 venture, The Rezillos,...

The Redskins were a skinhead punk band with a brass-driven soul sideline. Hailing originally from York (and known originally as No Swastikas) the band...