Born in rural poverty in 1933, Willie Nelson’s mother ran off when he was a baby, leaving him and big sister Bobbie to their father, who gave them to his parents because he preferred to play guitar.

The grandparents taught at a singing school and Willie was a quick learner. By the age of five, he was performing and he was playing guitar at six. By the age of seven, he was writing songs.

Nelson sold Bibles and sewing machines and hustled radio stations for work, making ads offering would-be songwriters the chance to have their masterpieces recorded “by professional musicians on your own record”.

He released his first, self-financed, single in 1956, but only hit his stride after his composition Family Bible was a 1960 hit for Claude Gray.

Later, with a family to feed, he tried selling some of his own songs, including Crazy and Nightlife, to Larry Butler for $10 apiece. Butler refused to take advantage – fortunately, since Patsy Cline, who initially didn’t much like the former, made it a huge hit in November 1961

Willie duly re-launched his solo career but, by 1970, a disillusioned Nelson had retired to run a  pig farm.

Back in Texas, he adopted a rebellious, long-haired hippie image, while developing a brand of country music that incorporated rock, folk and Western swing. 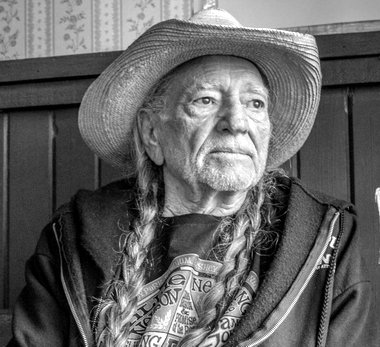 By the mid-70s he was at the forefront of country music’s outlaw movement.

After the success of 1975’s quietly iconoclastic The Red Headed Stranger, Willie’s bosses at Columbia Records were probably inclined to let him try just about anything. Still, the concept of Stardust (1978) must have made them nervous – why would the honky-tonker release a lavishly produced collection of Tin Pan Alley standards?

But if Red Headed Stranger confirmed that Willie Nelson was one of the great country artists of his day, Stardust sealed his reputation as one of the best and most distinctive American singers of any day.

Nelson broke new commercial ground with Stardust, which stayed on the US Billboard album chart for two years and made him a household name. A movie career followed, as well as more country hits, and Nelson later continued his genre experiments with forays into blues and gospel.

Venus Flight was my first high school band. I formed the band with Tony Smith and Mark Colwell in 1976 over a number of...

Since co-founding Buffalo Springfield in 1966 (and then splitting after two albums), Neil Young rarely stopped moving. Born in Toronto in November 1945, Neil Perceval Young worked in...