The 1960s pirate radio phenomenon was founded on a simple loophole and a cunning understanding of maritime law.

If a ship was moored three or more miles off the British coastline, it was technically sailing in international waters. A commercial radio station broadcasting from that ship – without a licence, on a stolen frequency, and with no intention of paying taxes – was legally untouchable. 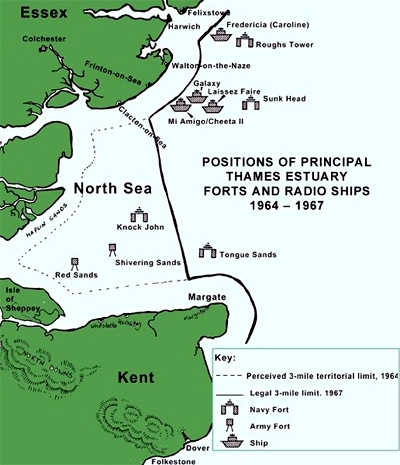 The British government, police, Navy, Customs & Excise and Coastguard had no jurisdiction.

The pirates first appeared in 1964, and by 1965 Radio Caroline and Radio London (‘Big L’) had revolutionised British radio.

By giving airplay to new groups the pirates curbed the dominance of the major labels and made the BBC (which rationed its pop output to a few hours a week) look like a dinosaur.

Pirate broadcasters frequently had to broadcast in atrocious weather while their ships rolled giddily.