The early and middle 60s are remembered by many as the time when The Beatles, Stones and big British beat took the world by storm. The charts were suddenly alight with strange, raw, uncompromising sounds; and for the first time in its long history, Britannia ruled the airwaves.

But the same period also witnessed the flowering of black R&B into the distinctive soul style, and the emergence of a number of primarily black singers, groups and music business aficionados who changed the sound of contemporary music as much as the white beat group and protesting folkies.

Soul music was a natural progression rather than a specific invention – an amalgam of blues, old-style R&B, gospel and pop. And the 1950s had brought a new awareness within the American black community that they should celebrate their heritage, not hide it – and so gospel’s energy and emotional pull began to infiltrate more traditional R&B styles.

It had been primarily black groups who had initially provided a model for most of the successful white beat groups, but it took some years for the largely white pop audience to turn its ears in the direction of Memphis and Detroit.

Fortunately, groups like The Beatles and The Rolling Stones made no secret of their influences, and it was partly their praise that helped establish soul.

Few Beatles’ fans had heard of Smokey Robinson and the Miracles before the Fab Four started drooling over them, while the Stones based their early repertoire on a large variety of black artists – among them Marvin Gaye, Otis Redding and Chuck Berry.

In Britain, interest in soul was initially largely confined to the Mods, who found in the music the sharp, cool defiance that they themselves had assumed. While in the unrelenting 4/4 rhythms they discovered the ideal vehicle for their footloose dancing style. They could also point righteously to the emotion and feeling of soul music, a complete contrast to the synthesised productions of most of the pop market.

The situation in America was hardly better. Although black music was more readily accessible there, and always made more of an impression on the charts, white groups stole most of its fire, while the folk boom became another factor limiting its success. Moreover, racial tension ran high there. Gradually things changed.

In Britain the discotheque crowd edged a few singles into the lower reaches of the charts, the record companies woke up to the potential of another market, and the BBC could no longer afford to ignore the existence of music that the pirate radio stations were all too willing to play.

1965 and 1966 finally saw soul records making the hallowed Top 20. The Supremes at the most commercial end of Tamla Motown‘s spectrum had already had some success; but it was the appearance of Wilson Pickett‘s In The Midnight Hour in autumn 1965 that marked the start of a new era.

The first Motown package tour had already flopped fairly disastrous in the UK (everywhere outside London, at least) and 1966 saw Britain’s first – and virtually only – #1, Reach Out I’ll Be There by The Four Tops.

From 1966 through to 1968 soul music was in fashion on both sides of the Atlantic and finally, most performers in the field achieved some degree of (albeit belated) recognition. Of the artists who established a definitive soul style that others imitated, the most influential were James Brown, Otis Redding and Wilson Pickett, though the part played by studios, labels and producers was equally as important. In the case of Motown and Stax, it was crucial.

But as the familiar commercialisation process kicked in, so the music tended not to improve, but to fall back on a formulaic sound and style, increasingly trapped in its own cliché’s, and increasingly diluted in its potency for the mass pop market.

Most soul groups and artists achieved amazing longevity, and since soul is to some extent a separate and self-perpetuating musical culture, it seems wrong to talk of soul ‘dying’ in the late 60s.

The white audiences might have tired of it and moved on in search of psychedelia, but soul continued anyway. But far from “telling the truth”, soul was becoming more and more contrived and divorced from the emotion that was meant to be its foundation.

Since the 60s and 70s were such a fertile period for soul music you would be hard pushed to find a truly bad album recorded in that 20-year span.

But come the advent of the 80s and soul had become an unruly monster, its very own antonym: synthetic, clinical and cold. 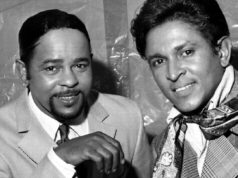 Born in Philadelphia, Solomon Burke started preaching at the age of seven, sang on the radio at 12, was signed to the Apollo label...

This Brooklyn doo-wop group was originally known as The Linc-Tones when they formed in 1955 at Lincoln High School. Original members Hank Medress, Neil Sedaka, Eddie Rabkin and...

One of scores of LA bands who briefly flourished then slipped back through the cracks in the late 1960s, Colours took the ornate, harmonic...