Bandstand was the longest-running Australian pop television show of its time, and throughout its fifteen years, it featured the same host (bespectacled Channel Nine newsreader Brian Henderson) and the same format.

Based on Dick Clark’s American Bandstand, the Australian show was pre-recorded before a studio audience, with singers lip-synching their way through numbers performed on elaborate studio sets.

While other pop shows presented screaming fans and long-haired beat groups, Bandstand somehow seemed to ignore the extreme trends in music that happened in the mid and late 1960s.

Although it showcased a range of pop performers, it shied away from the brash and the scruffy, becoming a more family entertainment programme than a show strictly for teenagers. Bandstand’s fifteen-year run saw vast, bewildering changes in pop music, but by maturing with its viewers, the programme retained the loyalty of the viewers who had grown up with it.

Pop shows abounded on Australian TV in the mid-60s; There was Bobby & Laurie‘s Dig We Must, Billy Thorpe’s It’s All Happening!, Ross D Wylie’s Uptight, Tony Murphy’s Saturday Date, Go!! with Ian Turpie (and later Johnny Young), and Teen Scene with Johnny Chester.  Bandstand outlasted all of them.

Each Bandstand episode was usually a themed musical production with lavish studio sets.

By the time its young producer/director Warwick Freeman left in the mid-60s, the show was costing $6,000 a week to produce. Occasional outside broadcasts added variety – In December 1963, for example, in the midst of the glorious summer of Australian Surf Music, one episode was filmed at Sydney’s Avalon Beach.

With its broad appeal, Bandstand attracted a weekly viewing audience of two million at the height of its popularity. It was voted the best youth show of 1961, and Brian Henderson won a Gold Logie – the supreme accolade in Australian television – in 1967. He even recorded a single called What Is A Square?, a spoken sermon on the moral virtues of the uncool, which mercifully failed to chart. 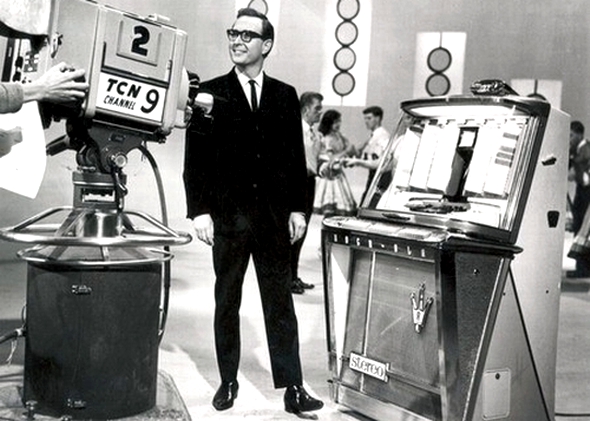 Overseas performers ranged from middle-of-the-road singers like Neil Sedaka, Shirley Bassey and Wayne Newton, to The Rolling Stones and an electric Bob Dylan during the Australian leg of his historic 1966 world tour.

The show grew out of its strictly teenage format and the youngsters twisting in the background gave way to elaborate sets and ambitious musical production numbers.

Four years after its demise, Bandstand was briefly resurrected in 1976, this time with Daryl Somers as the host, but the experiment was doomed to fail. After all, Brian Henderson was Bandstand; Benign, calm, and paternal but never patronising.

Henderson remained the chief newsreader for Australia’s Channel 9 until finally announcing his retirement in 2002. In February 2020, it was announced that Henderson had contracted kidney cancer and opted not to receive treatment