The show was put together by 50-year-old actress and theatre producer Joan Kemp-Welch, who had entered the world of television when Associated-Rediffusion came along and secured ITV’s London weekday franchise.

Billed variously as ‘a disc programme for Squares’ and ‘a Square disc programme’, the show was broadcast live from London’s Television House (home of Associated-Rediffusion) in Kingsway, and although some guest artists were booked to mime their latest releases, most of the music was interpreted by dancers performing to the popular records of the day. 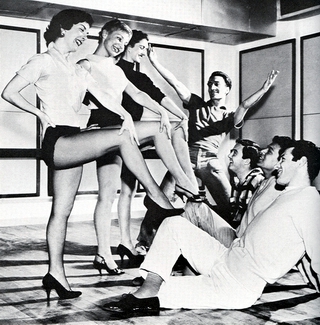 The programme budget was only £200 per show, so the dance routines were staged all over the building – in the basement studios, in the foyer, in offices, along corridors and up staircases.

The resident dance group was led by a young hoofer from Nottinghamshire named Dougie Squires. He eventually became one of television’s most prolific dance directors, notably working with his Young Generation on showcases for the likes of Lulu and Rolf Harris in the 60s and 70s.

Among the dancers who appeared on the show as they worked their way up the entertainment ladder were names such as Una Stubbs, Amanda Barrie and Patsy Rowlands.

Sitting behind a desk, pulling on a cigarette and speaking in a transatlantic twang, he built the show into a hit, helped by his laid-back presentation and the glamour of his accent.

Library film was also used to illustrate songs, or sometimes simply a series of drawings or illustrations. 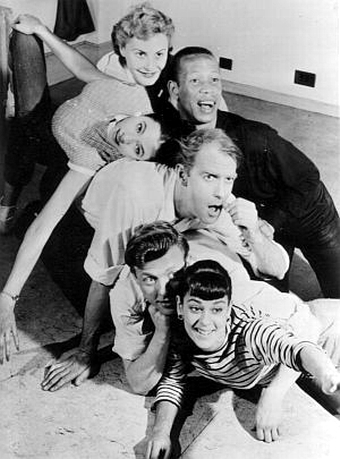 At first, only five shows were made and it screened only in the London area, but the 15-minute twice-weekly programme soon became so popular that it soon gained a longer late-night edition on Fridays and was picked up by the other early ITV regions.

Cool For Cats very quickly became an influential programme in determining which records became hits. On the occasion of the 100th edition, in May 1958, the show played its 1,000th record.

Not everybody approved of the show, however – a group calling themselves ‘serious music lovers’ sent Kent Walton a card bearing the message ‘Drop dead please’.

Cool For Cats hung around until February 1961, by which time television was enjoying greater success with more lively attempts at capturing the ever-changing pop music scene.

Merle Haggard and Johnny Cash both learned the value of prison at around the same time. For Cash it was the release of the two prison albums...

Chris Clark was a 17-year-old, 6-foot platinum blonde when she arrived at Motown's Detroit headquarters in 1963 to audition for Berry Gordy Jnr. The Motown...

Paul Anka was born in Ottawa, Canada, on 30 July 1941, and started singing professionally at the age of 12 with two friends. The trio...

It's Immaterial were formed by three former members of Yachts - John Campbell, Martin Dempsey and Henry Priestman - joined by Paul Barlow on...