It’s no coincidence that Britain embraced Glam at precisely the moment that colour TV sets became affordable. It was a visual revolution which would see metaphorical bloodshed, and a new order arise. 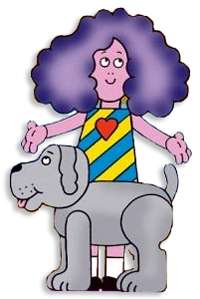 Out went any series which looked great in black and white but lacked the imagination to capitalise on the potential of colour images; Andy Pandy, Lamb Chop and Bill And Ben stood no chance against the Glam appeal of Crystal Tipps And Alistair, The Wombles (pop stars, even) and Follyfoot.

Any series which had previously been set-bound had to find it ways out onto the streets to fully exploit the Technicolor splendour of the new telly.

Being relatively new and thus brave and brash, ITV had the Glammest of Glam TV shows. The BBC might have had the writing talent (Steptoe & Son, Till Death Us Do Part, Whatever Happened To The Likely Lads?), but the commercial channel had the fish ‘n’ chips eating, Woodbine-smoking, narrow ambitions of the Great British public in their writers’ minds.

ITV knew how to work the glitz, captured the ready-rubbed seaside humour which was just beginning to work its package-flight way to the Costa del Sol.

The BBC had history, but ITV had the day. The world was changing, and ITV was determined not just to watch it change, but it wanted to be a part of that change. On The Buses undoubtedly had the sharpest, smartest producer in independent television.

Spy shows had it made: airports, hotels, palm trees, casinos, electronic gadgetry were all crammed into such early outposts of Glam TV as The Saint, The Baron, Man In A Suitcase, Crane and The Avengers.

The heroes, who would operate in a different international location for each episode, were all suitably ambiguously employed. The Baron was a jet age antique dealer who owned exclusive shops in London, Paris and Washington and also worked as an undercover agent for the police and government.

Roger Moore’s Brylcreemed Simon Templar in The Saint, who was a kind of freelance instrument of justice, easily made the transition to colour via various international ports, while the lesser-known Crane was a Moroccan-based smuggler who owned a rundown café in Casablanca.

The Avengers, which had made a name for itself in the Sixties by employing surreal black and white images in dazzling arrays of technical wizardry, sexy female leads in black leather and white Lotus Elans and the odd (indeed) car chase, and run its course by the early Seventies. It did return at the end of Glam as The New Avengers, but with the wrong exotic location (Canada) and wrong car – Purdey’s rust-prone Triumph TR7 – but with a kitsch appeal all of its own.

The fact is, of course, that it didn’t matter what the heroes and heroines of the Glam shows actually did or how they were paid, as long as they were living lives beyond the norm. With the coming of colour, the life was there to be witnessed and copied: Department S, The Protectors, The Prisoner, The Champions, The Persuaders – all offered views to a Glam new world.

The ultimate in Glam heroes left the successful Sixties spy series Department S in 1971. Jason King, gloriously played by the Figaro-moustached Peter Wyngarde, was a ludicrous rake who operated as a most unlikely international best-selling author-come-counter-espionage agent.

Of course, this was entirely a front for his true occupation: that of a bizarrely besuited Glam clothes horse. King/Wyngarde was arguably the only character in television history (in human history!), born to wear spearpoint collared shirts, bulbously knotted ties and pin-striped suits that flared into absurdity.

Curiously, Jason King also seems to appear on a million Seventies wedding photographs. He is usually some distant uncle or friend of a friend who was never heard of again.

One of the most natural resting homes for Glam would be the British sitcom. Every a patchy genre, it spent a good deal of the Sixties directly opposing the notion of Glam or glamour. There was no trace, for instance, in Steptoe And Son – unless you count the fact that Elton John chose Hercules as his middle moniker because it was the name of the Steptoe’s horse.

But with the advent of colour, On The Buses and Love Thy Neighbour offered a brash streetwise Glam, while Clement and La Frenais’ Whatever Happened To The Likely Lads? perfectly encapsulated the everyday tension abroad in a Britain not long over rationing, where town centres still offered views into Second World War bomb craters and the unions held power over the Government.

Terry and Bob were the two faces of a country enjoying boom (Glam) and recession (glum) in quick succession. Terry was old Labour, old Britain, content with a few pints, birds and football, an eternal Lad; Bob was the flared-lapelled, fat tie-wearing social climber moving into his first, newly-built home with wife and new Vauxhall Viva.

On the opposite coast of England, beginning in 1969, Carla Lane’s garishly clad Liver Birds had started to hint at a new-found feminist freedom. Created as something of a distaff Likely Lads, the two girls, Beryl and Dawn, raged through a late Sixties Liverpool, embarrassing the male population which torrents of striking sexual innuendo.

Sex was a major ingredient in Glam. It was as if Britain had suddenly discovered sexual innuendo and was determined to see how far it could go. All the way, was the naturally smutty answer.

Sex was a recurring theme of Glam sit-comedy and it was never more nakedly apparent than in the mighty Man About The House (1973-1976), in which Chrissy (Paula Wilcox) and Jo (Sally Thomsett) were forced to share an Earls Court flat with the man that many considered to be the luckiest person alive, catering student Robin Tripp (Richard O’Sullivan).

The situation, in which the two girls had to initially conceal Tripp’s presence from snooping landlord George Roper, was merely the backdrop for light-hearted sexual banter which, by later standards, seems astonishingly blatant.

Strangely, despite the obvious glamour of the girls, it was Robin who made the most lasting impression. Heavily side burned and strikingly garbed in denim coats, roller penny-collared shirts with patchwork patters, Oxford bags and platform shoes, Robin Tripp was the perfect example of street level Glam.

Man About The House produced two spin-offs, both of which contained hints of Glam. In Robin’s Nest, Tripp had set up a restaurant with his live-in girlfriend, Vicky (Tessa Wyatt, the ex-Mrs Tony Blackburn), which continued the trendy domestic situation while George Roper and his wife moved to leafier areas to chastise each other in George And Mildred – played by Yootha Joyce, who was quite the epitome of pink lampshade ‘n’ frills suburban Glam.

When her club-owner fiancé (Larry Don Johnson) is beaten to death by gangsters, foxy lady Sugar Hill (Marki Bey) decides not to get mad,...