In 2014, executives from 100 British toy companies were invited to cast their votes on the games which they thought had most shaped the industry and childhoods over the last 50 years

All of the executives were asked to reveal their top three toys of all time, with the only condition being that they weren’t allowed to vote for their own toys.

Lego was crowned the greatest toy of all time, with all but a few voters putting it in the number one spot. Iconic board game Monopoly came second, with Action Man in third, slot-car racing game Scalextric in fourth and football toy Subbuteo in fifth.

The rest of the top 10 was rounded off with Rubik’s Cube, Star Wars toys, Barbie, Matchbox Cars and playing cards. 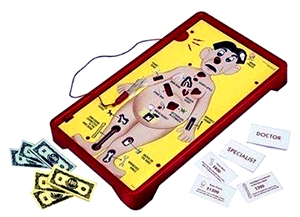 Other recognisable names in the top 50 included Ker-Plunk!, Frisbee, Play-Doh, Atari and My Little Pony.

However, popular toys absent from the top 50 list included games such as Etch A Sketch, Dungeons and Dragons, Pokémon cards and Cluedo.

The top 50 also included a few surprises such as Cards Against Humanity (a risqué party game involving playing cards popular with university students which launched in 2011 after it was successfully funded on Kickstarter).

Rebound was a miniature board-game version of shuffleboard. The board was split down the middle by a wall. The player launched one of four pucks...

There has always been fast food of sorts, but 1950s America put mass-produced, flavour-rich but nutritionally-poor fast food on the culinary map. It was...

Clannad (the name means 'Clan from Dore') came together because they were family - literally. Ciarán Ó Braonáin (the group's leader, bassist and guitarist), Pól, and Máire...