K-Tel were famous for their TV commercials pitching their mass-market compilation LPs and tapes and their household ‘gadgets’.

Everything they sold was labelled “As advertised on TV” as if that were a big selling point.

K-Tel compilation albums had groovy titles like Dynamite, Soul Motion and Super Bad. . . all with “20 Original Hits – 20 Original Artists” (albeit edited down to around 2 minutes each). 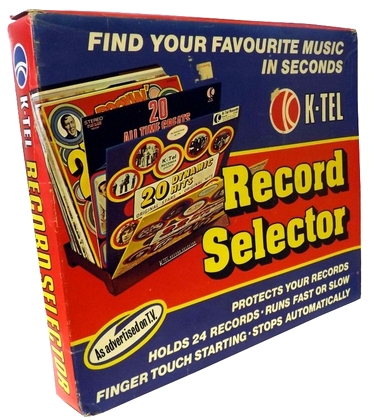 And the daddy of them all – the pinnacle of 20th Century technology, the K-Tel Record Selector (pictured at right) – which allegedly worked “like a computer”(!) – and the equally scientific Cassette Selector.

How exactly did this marvel of vinyl-picking convenience work? Well, quoting from the back cover of a 1975 K-Tel album; “Record Selector and Cassette Selector is the modern method of storing and selecting your favourite music.

Simply place your albums in the Record Selector and cassettes in the Cassette Selector, move the first one forward and the others will follow automatically.

“The others will automatically flip slowly forward and the Selector will stop where the album or cassette was removed. It can then be replaced”. Now you can understand the comparison to a computer!

The Record Selector was capable of holding 24 records and the Cassette Selector 20 cassettes.

Canadian Philip Kives began K-Tel in the 1960s, and his biggest selling product was the Miracle Brush, which sold 28 million in the late 1960s. In 1966, K-Tel released its first compilation album, 25 Country Hits. It quickly sold out and prompted the follow-up, 25 Polka Greats. This one sold 1.5 million copies in the United States alone.

The hits kept coming and included the Super Hits series, the Dynamic Hits series and the Number One Hits series. K-Tel assembled the greatest hits from the latest, greatest artists in one single package. There were even thematic compilations like Goofy Greats, Super Bad, Super Bad Is Back, Souled Out, Summer Cruisin’ and a 1950s look-back, Rock ’n’ Roll Show.

K-Tel grew exponentially in the 1970s and by the early 1980s, the company had sold more than half a billion albums worldwide. 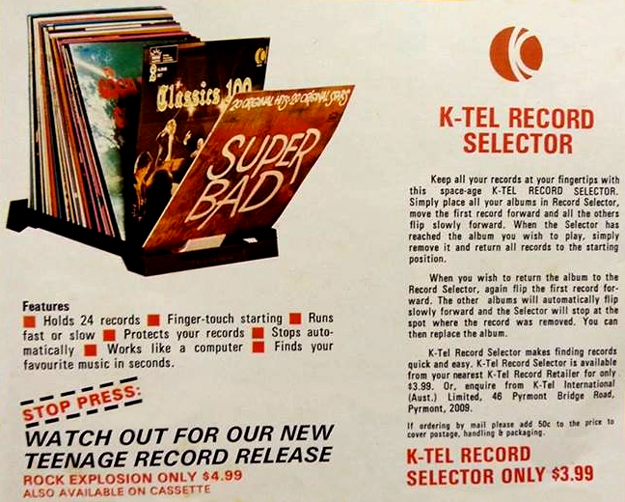