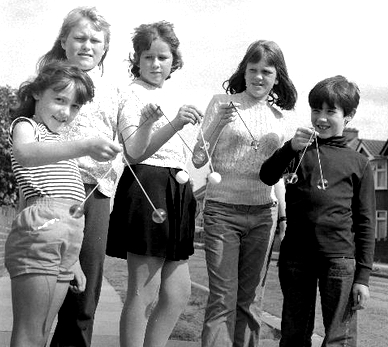 Klackers came on the market in the late 60s and lasted into the early 70s.

They were constructed of two acrylic or glass balls on a string with a ring or small handle in the middle.

The point was to get the two balls clicking against each other.

If you got really good you could do fancy tricks with them, like build up momentum until they were hitting on the top and bottom in an arc . . . and make a hugely annoying racket.

Kids loved them and they became THE craze of the summer of 1971. But doctors and teachers weren’t so impressed after a frightening succession of serious Klacker accidents.

Unfortunately, they allegedly had a nasty habit of shattering or exploding in a shrapnel-like shower and were promptly banned from every school in the western world – but kids all knew it was really a conspiracy from grown-ups because they hated the sound they made!

The similarity between this supremely popular toy and a South American hunting weapon called a bolo did not escape most teenage boys. In this capacity, they proved extremely effective. After a nationwide outbreak of badly bruised arms and black eyes, they were pretty much withdrawn from sale.

In the 80s, novelty companies produced a chintzy version with lightweight plastic balls with plastic rods connected to them to hold them in place. You could klack them, but it took absolutely no skill and was boring after a few minutes. But they were a lot safer.