The “New Romantic” movement was a new and distinctive music and fashion genre that sprang up in Britain in the early 80s as a reaction to the anti-fashion of punk.

After all, anyone could slap on a T-shirt, write “Destroy” across the front and rip their jeans with a razor. But to look like a New Romantic you had to really try hard, and spend a lot of time with a hairdresser – most of whom were New Romantics themselves anyway.

The look was completely overblown and the main rules were ‘big hair’ and ‘lots and lots of make-up’ (even for the girls!). Pirate costumes, Kilts and plus-fours were especially favoured, while some folks (like Duran Duran) took it all a little too far and added leg-warmers and headbands in a sort of mondo-aerobic cross-over. 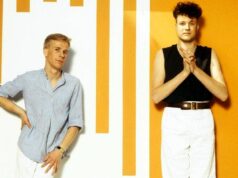 Like his art world contemporary Andy Warhol, Rudi Gernreich was a modern visionary and shrewd press manipulator. He guaranteed himself media exposure with sound...

John Lloyd Wright, the son of famous architect Frank Lloyd Wright, invented Lincoln Logs in 1916. The idea came to him during a visit to...

The key to successful surgery is a steady hand. Of course, it is also handy to have a patient whose nose lights up red...