For any kid attending a British comprehensive school between 1971 and 1977, Richard Allen’s Skinhead books were required reading.

‘Richard Allen’ was actually a pseudonym used by Canadian-born UK writer James Moffat (1922 – 1993) who wrote at least 290 novels in several genres under at least 45 pseudonyms, including Etienne Aubin and Trudi Maxwell.

The books in the Richard Allen series focused on youth subcultures of the late 1960s and 1970s – such as skinheads, hippies and bikers – but the books didn’t expose the lifestyle of youth to shocked and titillated adults, they were aimed at the kiddywinks themselves.

And if you had a smidgeon of cool, it was the New English Library’s Skinhead wot provided your sex ‘n’ violence education.

Introducing super-thug cockney Joe Hawkins. If this bastard ever appeared in EastEnders he would rape, kill or maim three-quarters of the cast before Ethel’s dog could say “strewf!”.

Hawkins consolidated the image of the skinhead as a London phenomenon and established very quickly that Mr Allen was not one of your wishy-washy liberal types.

Joe’s dad, docker Roy Hawkins, continues to vote Labour despite the ‘fact’ that “the long period of Tory rule had been the best in living memory”.

This crap, however, is unadulterated nicey nicey compared to the filth that follows:

“He leant against the bar between two coloured men. The stink of the blacks made him sick . . . ‘Spades’ or ‘Wogs’ didn’t count. They were impositions on the face of a London that would always be white, Cockney, true-British . . .”

Joe isn’t too keen on flower power either.

“. . . the hippies . . . Those bastards! The bleedin’ Welfare State took care of them – grants if they were students, handouts from Social Security to pay fines for demonstrating and pot-taking”

Joe beats up a youth club and has sex with a fourteen-year-old girl in front of her mother. Why? Because “his was a senseless world of violence for the sake of violence . . .”

Sadly Joe comes a cropper with the law, but all is not lost:

“Oh the stupid bastards – didn’t they ever learn! Didn’t they know that his crime being publicised would make him the king of skinheads . . .” 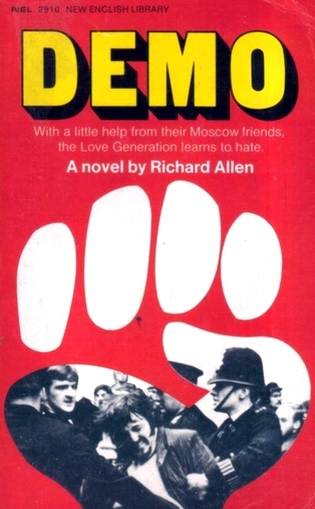 “With a little help from their Moscow friends, the Love Generation learns to hate”

“I’d like to use a cigarette end on those bastards myself!”

Allen gets his usual National Front rant across in defence of apartheid and attacking the unions, the Race Relations Act, ‘coloured’ immigration and the EEC (which will let “a million Italians swarm after British jobs”).

A bunch of teenage super-scabs expose the Russian spy behind the generation gap, reducing all the hippy arguments to pulp with their cold incisive logic:

“But what about Mai Lai? If those GI’s murdered because they’d been taking pot then . . . the sooner we have global control of drugs with stiffer than stiff penalties . . . the better”

This one was not a smash hit in the playground, man.

Part two of the Joe Hawkins saga, and in the foreword, Mr Allen insists that he doesn’t attempt to glorify Hawkins.

Joe gets out of the nick, discovers that skinheads have disappeared and so becomes a suedehead – sort of very violent mods who go around causing havoc at Chelsea matches with sharpened umbrellas.

“He thought the orange socks did something for his outfit . . . But the hidden glory was his underwear. God, if those sexy birds could only see his mauve jockey shorts and dyed emerald green vest”.

The book ends with Joe attacking an African speaker at Speaker’s Corner and getting four years.

“What would be the vogue when he stepped from those gates again? Would there be a new fad designed to capture his imagination?”

Does the Pope shit in the woods?

“In years to come,” Mr Allen tells us “Joe Hawkins will probably be quoted as an example of this era we have named the Permissive Age”.

“She eyed his nakedness and grunted. ‘That’s terrific!’ she exclaimed. ‘It’ll fit,’ he said with a nonchalance she loathed.”

Mr Allen’s smooth bedroom patter is only matched by his eye for fashion:

“First there was skinhead. Then came suedehead. Now it was boot boys . . . Squires, mohair trousers and a colourful pair of braces, he wore a Ben Sherman with round collar and a sheepskin coat. He felt right in the old groove standing next to Ginger in her check skirt down to her knees, her suede jacket with zip, her flat-heeled shoes with the crepe soles . . .”

This time, Joe offs a rozzer. Back to stir he goes, the naughty boy.

Before launching into this “terrifying story of a bother girl”, Mr Allen takes the space to lecture his detractors.

“Teachers are out of touch with their pupils . . . far be it from me to instruct educationalists and others what book should, or should not, be placed on the selected examination lists . . .”

These delusions of grandeur would intensify.

“Joan Marshall was a skinhead girl at 15 with all the savagery and excitement that went with it”. “Her motto was ‘today is now. tomorrow is never'”.

Almost totally unreadable, this one.

“Blood seeped from the man’s eye, from his ear. Groans like those of a pregnant cow about to abort filled his ears . . . Blood spurted. The fan slumped!”

“Pig stick the bastard, Tom, stretch him out bleeding and you can fuck me!”

“Rolling in the aisles of degradation . . . the mob needed no verbal communication in order to manifest their base lusts. It was satanism at its worst – the worship of flesh in all its glorious of climaxes . . .”

This is an awesome book.

“Smoothies,” pontificates Richard Allen, “should do much to heal the rift between various factions of the skinhead cult”.

The skinheads were a mob “bent on numerically superior aggro” but the smooth is “crawling from the slime advancement”.

Talk about talking down to your audience!

Dazzler Black is a “skinhead turned suede who’d forgotten how many paki’s he’d bashed, how many fuzz he’d kicked, how many girls he’d raped . . .”.

Mr Allen concludes with a sympathetic and pornographic account of an attack on Ugandan Asians. Ugly.

He’s banged up in a cell with Basher and Danny the Rat. “I’ve never smashed a rozzer in me fucking life, mate” Danny tells him.

Joe becomes an Arsenal fan after he sees on TV that West Ham have signed two black players. A black prisoner “laughs frenziedly”.

Joe has lots of torrid (strictly non-acid) flashbacks and then gets his teeth kicked in by his arch-enemy, Charlie McVey.

“The exploited kids were his passport to fame”. Donny Osmond clone Bobby Sharp is hyped into the charts by a team of pro-Lolitas who roam the country’s coffee bars conning the kids.

But Sharp is upstaged on a live TV show by ex-skinhead band Johnny Holland and The Jolly Green Men who adventures continue in . . .

After their manager dissuades them from a bit of retrogressive racial violence, Johnny writes Aggro Addict, a paean to skinheadery which makes the Top Ten.

Here Allen froths at the mouth.

If only Johnny Holland wasn’t so intent on selling out he could use his Aggro Addict to whip up “a patriotic frenzy those who had opened the door to immigration could never know, a frenzy akin to self-destruction in a desire to right so many wrongs inflicted upon his fellow Englishmen . . .”

Enoch Powell is lauded and The Jolly Green Men get to beat up lots of pop transvestites and gays.

Allen sounds desperate in the foreword – “How can anyone condemn the Skinhead books when, according to the letters received from countless thousand fans, the consensus of opinion is that they -and they alone – present skinheads, suedeheads, boot boys and . . . smooths as they really are? What would their value be if every ‘terrace terror’ spoke and acted like an undergraduate of a theological college?”

Terry is a skinhead girl who gets mixed up with some wrong ‘uns at a folk festival. She isn’t too keen on the “drug dependence that seemed to infiltrate through every strata of folk”.

Sorts is Allen the racist at his foulest.

“A Pakistani dancer in national costume came into sight. Terry scowled . . . Recently she’d forgotten what it was like to be the butt of every liberal do-gooder’s loathing for trying to keep Britain white . . . if only Enoch was Prime Minister she thought”.

A ‘top gear skin’ is a skinhead with long hair, apparently. Roy Baird has pretty much the same outlook on life as Joe Hawkins.

“Her buttocks packed a pair of Levi’s with all excitement a bloke could imagine”.

Top Gear Skin was the last book Allen would use as a blatant platform for his right-wing worldview. Once again he makes explicit references to the ‘problem’ of the Ugandan Asians, mirroring, as did all of his pseudo-political rantings, the line being put out by the National Front.

Obviously, someone somewhere was telling Richard Allen to tone down the Nazisms.

He can’t resist one last little dig, though, as Joe Hawkins, freshly escaped, sets off to Australia to revenge himself on his arch-enemy, Charlie McVey:

“Thanks to mismanagement by Heath and Wilson, these people were leaving their homeland for a better life. A chance to cast off regulations, freezes and union-dominated dictates that had pulled Britain down from an Empire power to a third-rate Moscow pulled puppet”.

Oh yes, and Joe Hawkins dies in a plane crash somewhere over Indonesia.

In Terrace Terrors ex-skins wipe out the problem of football hooliganism by kicking the shit out of ‘terrace terrors’.

This is a good thing because as Allen points out, the ‘terrace terrors’ aren’t as nice as the skinheads:

“These thugs are not exuberant youth running wild during the formative years. They’re savages. Animals. Mad dogs to be put down. Vicious, sadistic louts without an iota of common decency”.

Dragon Skins cashes in on the Bruce Lee Kung Fu craze whilst trotting out the same old crap.

This is the third book in which Allen attempts to write for his female readers.

This he does by cutting out the sex scenes.

After giving an unsolicited plug to David Soul’s music, Allen bungs his heroine in chokey.

On the plus side, Leeds is destroyed in Chapter 5.

“The punks were on the march and the Teds were out to knobble them . . .”

Richard Allen just could not handle punk. It completely did his head in.

Ray’s arch-enemy is Steve Pepper, a scumbag hack for music fanzine Spins who got his job through blackmail and who fills the pages of Spins with foul language and pictures of naked 15-year-olds with safety pins through their skin.

Continuing his ruthless exposé of the biz that he started in Teeny Bopper Idol, Allen reveals that punk is just another attempt to exploit the kids.

Allen ends the book with a massive Ted v Punks riot. Sadly for old Dick, back in the real world punk was the ‘fad’ that spawned Rock Against Racism and the only street battle worthy of the name was the National Front getting kicked off the streets of Lewisham by a multi-racial crowd.

Joe Hawkins would have spun in his grave.

It was the crime that shocked Australia - pretty 26-year-old nursing sister Anita Lorraine Cobby was found brutally murdered in a field at Prospect,...

As the pop music scene matured in the early 70s, so its audience widened to a younger age group - the Teenyboppers. No longer...

The hovercraft was invented by British boat builder Christopher Cockerell in 1956. The theory behind one of the most successful inventions of the 20th...