Streaking first appeared in the early 1970s when students in the USA used it during protests and demonstrations. They streaked the Lyndon Johnson Library, making Lady Bird laugh and Walter Cronkite blush. Records were broken and re-broken daily.

The University of Georgia mustered 1,543 students for the largest streak, and Laura Barton – a freshman at Carlton College in Minnesota – became the first female streaker when she appeared for an unscheduled curtain call following the school production of Measure For Measure. Ms Barton won fame but lost her boyfriend, a straight-laced fellow she was probably well rid of.

It wasn’t long before the trend caught on in Britain with streakers graduating to sporting events and student parties. 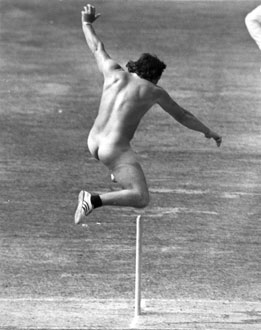 Thee pastime received its most notable exposure at the England v France rugby match at Twickenham on 20 April. Australian Michael O’Brien was captured by a policeman, who then found his own way into streaking folklore when he shielded O’Brien’s genitals with his helmet (pictured above).

Another major public streak in Britain came at Lords in 1975 when Michael Angelow, a navy cook, leapfrogged over a set of stumps during the Ashes, wearing just his plimsolls and a smile (pictured at left). It set a trend for wannabe streakers nationwide.

A top-selling novelty single by Ray Stevens – simply called The Streak – served as a rallying cry, and the sudden appearance of various streakers lent a touch of absurdity to live performances by pianist Van Cliburn and dancer Rudolf Nureyev, The Tonight Show, many sporting fixtures, and even the Academy Awards telecast. 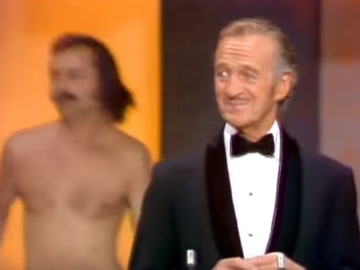 During the 1974 telecast of the Academy Awards, while David Niven was on stage presenting an Oscar, a man named Robert Opel streaked naked across the stage, flashing a peace sign (pictured at right).

Niven quickly noted, “Isn’t it too bad that the only laugh that man will ever get is by stripping off his shorts and showing his shortcomings?”

Perhaps the best-known streaker of all time is Erica Roe who ran half-naked onto the pitch at Twickenham in 1982 when England was playing Australia.

Erica later made £8,000 from TV and modelling appearances.

Mark Roberts is well-known as a ‘serial streaker’, having exposed himself 150 times including streaks at Sunderland’s Stadium of Light, the FA Cup Final, and the Grand National. He plans his streaks with meticulous care and attention to detail.

His most memorable streak was jumping naked onto the floating weather map on TV’s This Morning in 1995.

Ricochet Racers were just cooler than cool - well, the bloody big gun you fired them out of was. Putting the cars into the cartridges,...

Painting the face and body became another psychedelic trip of the 60s. Mod model Twiggy added a famous flower eye to her look, and suddenly everyone wanted...

An attempt by Khmer Rouge leader Pol Pot to form a Communist peasant farming society in Cambodia resulted in the deaths of 25% of...

The Spin-Fire, the Mach-1, the Night Winder, the Prowler, the Wedge and the Bonehead. Excepting (maybe) the Bonehead, this reads like a list of...