The original teen fashion rebel of the post-war era, the “Teddy Boy” paved the path of rebellion for all hooligans to come.

During the war years, young men filled the working positions left vacant by their enlisted fathers, and they had money to burn when their fathers returned.

This new prosperity allowed adolescents to do something they had never done before: engage in a carefree lifestyle called the teenage years.

Originating in the early 50s on the streets of Elephant and Castle in South London (the first and toughest Teddy Boy gang was “the Elephant Mob”), the Teds were working-class youths looking for an identity, and they found it through a preference for romantic Edwardian dressing. (“Teddy” being a nickname for Edward).

The Edwardian look was one of dapper refinement, featuring slim coats with velvet trim and the impeccable tailoring preferred by upper-class gentlemen. The Teds built their own characteristic look by mixing the Edwardian style with American Western and rock and roll looks.

This conjunction of styles from the past and the present created a dandified neo-Edwardian look that would earmark the start of fashion-conscious youngsters.

The Teddy Boy look soon found its way across the shores to American boys, turning conventional society on its head. The rumblings of angst were ready for an identity, and teens used the Teds as a prime example. Long, draped jackets were borrowed from the zoot suit and juxtaposed with thin, bootlace ties from the western look.

The only thing to top off such an outrageous cornucopia of clothing was the wildly styled, Brylcreemed pompadour called a DA (“duck’s arse”).

The mandatory accessory was a metal comb, which restyled the hair into pompadour perfection after it got tousled during a fight.

While the Teds started as a fashion clique, they soon earned a reputation for fighting and vandalism.

They hung out on street corners, desperate to converse away from the parents who didn’t understand them. They carried flick-knives, bicycle chains, toffee hammers and razors. They started gangs and terrorised the conventional world.

Much was made of their aggression and violence, but most first-hand accounts of gang battles insist that the preferred weapons were stones, bottles and boots. After all, nobody wanted to hang, so the aggression was largely ritualised. 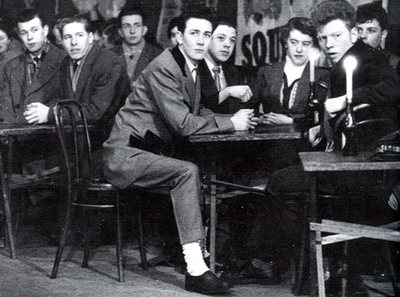 Teddy Boy style was a direct ancestor of the leather jacket, T-shirt wearing American bopper look that was eventually preferred over the elegant stylings of the Brits.

Though the Teddy Boy style was inherently male, there were girls who were friends and sweethearts of these new fashion rebels, and they adopted their own look based on the boys’ style.

‘Teddy girls’ (also known as ‘Judies’) paired the velvet-collared jackets with slim skirts (often stiffened with sugar) and black stockings and wore heavy black eyeliner. They also wore winks, and some girls even went so far as to adopt the greased pompadour DA for their hairstyle.

The media, though, was less interested in Teddy girls since a young working-class woman’s role was still at the time focused around the house.

The Teddy Boys created the first clique based on fashion: Teddy Boys recognised other Teds and banded together, leaving the others behind. Most parents strongly opposed their sons becoming Teds.

The backlash was especially strong in the north of England, where it was seen as an effeminate, antisocial southerners craze.