The liberated new man of the 1970s was not afraid of scents. A whole new arm of the perfume industry opened up especially to pamper him.

Where his father’s options had pretty much been Old Spice or Aqua Velva (which were still around and still maintained their popularity), the 70s man now had Brut, Hai Karate, Chaz (advertised by pre-Magnum Tom Selleck), Denim and hundreds of other whiffs and stenches to choose from.

Curiously, the scent of musk was very prevalent in the 70s aftershave market.

Freshly squeezed from the glands of a . . . well anyway, this ingredient was alleged to exude a pheromone-like power from the chain-laden neck of the 70s man.

Unfortunately, it ponged like an old settee that had been left out in the rain!

The majority of 70s aftershaves reeked of alcohol (the primary ingredient) anyway.

But it did seem incredibly important that the aftershaves accentuated a bloke’s masculinity – cue Messrs Kevin Keegan and Henry Cooper advertising Brut by flicking towels at each other in the showers (er?).

Barry Sheen splashed it all over too . . .

AQUA VELVA
A refreshing blue toner that smacked your face in the morning, and sealed a smooth complexion, Aqua Velva initiated boys into the role of pubescent grooming.

Boys copied Dad as best they could, slapping a dash into their palms and patting their too-young-to-shave faces.

Aqua Velva’s biggest selling point has always been the cooling menthol that soothes away razor burn.

BRUT
Created by Fabergé in 1964, Brut was so named to evoke something raw and rugged. Coming through on the promise, this spicy and manly fragrance guaranteed olfactory pleasure in a complete line of men’s grooming products.

Brut was often the first fragrance a boy discovered in his emulation of Dad. The powerful scent of aftershave was like a glimpse into your shaving future and all the other manly things that came with a razor.

Nestled beside the rows of bottles from Mum, Dad’s small space in the bathroom cabinet was filled with the potent scent in the deep green bottle with a silver medallion. Whatever your stage of manliness, Brut was there with aftershave, shaving cream, power stick deodorant, splash on lotion, cologne and even hairspray.

Brut 33 offered ‘Essence de Brut’ in 1972, a more intense scent and a variation of fragrances. But men are creatures of habit, afraid to mess with a good thing, so the line was discontinued in 1974.

Fabergé didn’t give up trying to offer men a more enticing repertoire of grooming, and in 1983 the company introduced the potent, but short-lived Brut Royale. By 1988, enough men were finally willing to join the ranks of cologne wearers, and that year’s spray cologne was embraced.

Chesebrough-Ponds adopted the Brut line in 1989, continuing to offer a complete line of grooming products. The line still evolves with the needs of its consumers, and Brut remains a top seller.

DENIM
First released in 1976, Denim was originally available in three variants – Original, Black and Musk – and marketed as being “For men who don’t have to try too hard”. The rich scent is spicy and woody and considered very masculine. Bizarrely, Denim was marketed in Australia under the brand name “Ménage”. 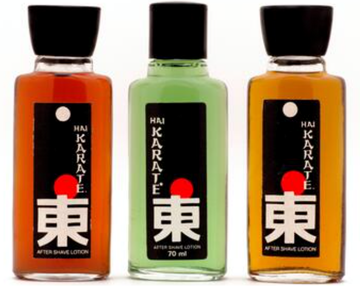 But a clever karate-themed advertising campaign – and the addition (in British TV commercials) of Valerie Leon – ensured it became one of the most famous men’s budget fragrances of the 60s and 70s.

Hai Karate (known as ‘Hai Jakarta’ in Australia and New Zealand) faded from the fragrance scene in the 1980s. It was reintroduced in the UK under official licence in late 2014.

“Use too much and you’re asking for trouble because just one whiff drives women wild – it makes men irresistible. Fortunately, every pack of Hai Karate contains essential instructions on self-defence – Hai Karate aftershave, be careful how you use it.”

OLD SPICE
Old Spice and its buoy-shaped bottle were originally created in 1938. By 1969, magazine advertisements were reminding women that, “men who wear Old Spice, know what women want.”

Old Spice has a spicy smell to it – hence the name – with overpowering notes of sage and cinnamon when first applied, fading to a pleasant musk and cedarwood scent.

TABAC
Tabac aftershave lotion was introduced in 1959 by Maurer & Wirtz and contained a blend of lavender, bergamot, citrus and warm florals. It’s still made today (although no longer advertised by the late Peter Wyngarde!).