In 1950, pizza was confined to America’s Italian colonies, and the Atlantic Monthly took the good news to the rest of the country:

“You eat it, usually, sitting in a booth in a bare, plain restaurant, with a mural of Vesuvio on the walls, a jukebox and a crowded bar.”

By 1955, pizza eating was a fad – the thing to do after the school sock-hop – and pizza threatened to replace the avuncular hamburger as the teen’s favourite snack.

The Italian pie had been popular in US East Coast cities since the early 1900s, but its popularity spread nationwide after World War II when GI’s returned from the Italian campaign with a taste for the stuff.

As a result, the Pizza Parlor became as integral a part of American life as the Hot Dog stand.

Calentano Brother’s Frozen Pizza was introduced into shops in America in 1957 – the first ever frozen pizza on the market.

Thanks to Calentano Brothers, hungry Americans could now enjoy pizza at home with a minimum of inconvenience, and frozen pizza soon became the best-selling item in the frozen foods aisle. 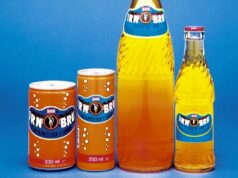 Atari’s Indy 800 brought multi-player racing to the masses, but the company’s Sprint series took the genre to the next level, offering greater speed,...

Aqua Net's glue-like hold has been making hair happy for decades: teen girls fumigated their parents' bathrooms when they were shellacking their beehives back...

Four hippos of orange, yellow, green and pink were the adorable stars of this game - but they were anything but sweet once the...