With the arrival of more money in people’s pockets to spend on both essentials and luxuries (first in the United States from the late 40s and then in other industrialised countries from the mid-50s) shops and shopping were transformed.

In the 1960s, an increasing choice of branded products filled supermarket shelves, amongst them frozen and chilled items such as ready-made meals, yoghurt and desserts (for most homes now had a refrigerator). 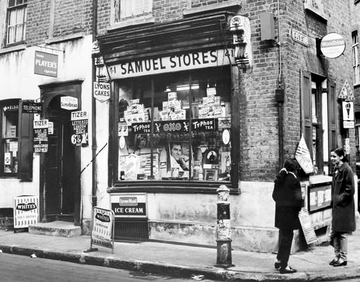 Brands were often aimed at children and promoted on TV by popular cartoon characters. Breakfast cereals provided an instant meal for hungry kids and busy mums.

New products for the 1960s included Fairy Liquid (1960), J Cloths, Pledge aerosol (for ‘real wax beauty instantly as you dust’), Blue Band margarine (which could be spread straight from the fridge), Colgate Fluoride toothpaste (1964) and Smash instant mashed potato (1968 – although the Martians in the TV commercials didn’t land until the early 70s).

With employment high and most enjoying a reasonable income, the early 1960s saw a growth in consumerism, and as Britons began to travel to the Continent on package holidays, many brought back a taste for Continental cuisine and wanted to experiment with ingredients like pasta, aubergines, green peppers, herbs and garlic.

Gradually a few shops began to respond to this demand, and in 1964 the first of Terence Conran’s Habitat shops opened to provide the correct utensils.

It was during the 1960s that the shopping mall took off as a retailing phenomenon, particularly in the United States. 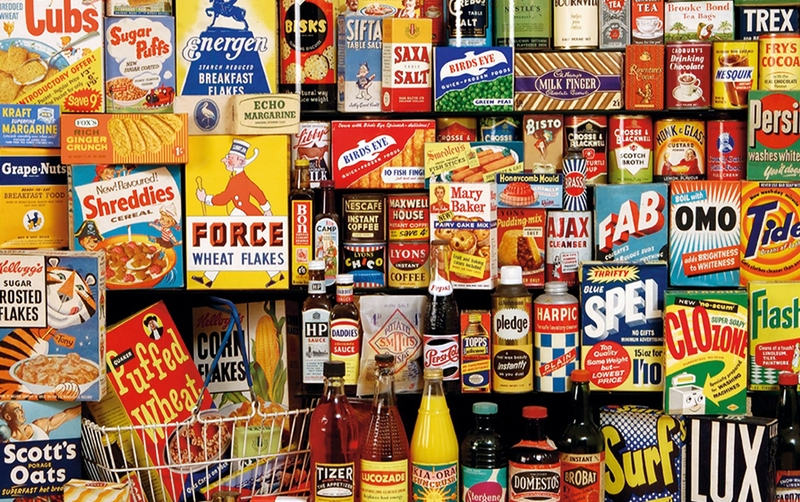 In the US, the first shopping mall (the Northland Center) had appeared in 1954 in Detroit and this new type of shopping centre had proven extremely popular.

Not only did the United States have the space to build such vast complexes but also people had the cars to get to them. Following in the tradition of the general trading store, the mainstay of the mall was the general food store, of both chain and individual units: by 1966, 95% of food was sold through such stores.

In the US and other countries, self-service became an increasingly popular and cost-effective means of retailing, helped not only by improved refrigeration and dehydration but also by improved packaging materials, such as cheap polythene.

Self-service supermarkets meant that packs had to appeal to the shopper rather than to the grocer, and packaging began to feature attention-grabbing design. 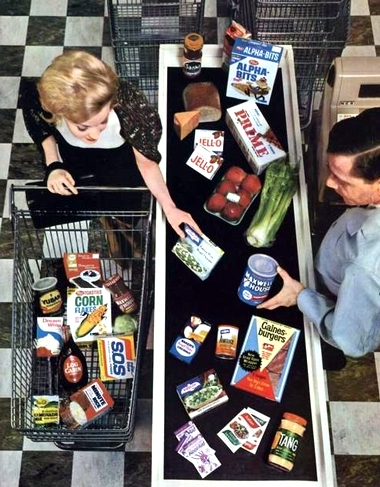 In Europe, the possibility of building vast shopping malls was a less serious proposition in the 1960s, some countries, especially France, preferring hypermarkets instead.

These were self-service supermarkets which, like the malls, were usually positioned on the outskirts of town.

Small-scale versions of the US mall did materialise in Britain in the form of shopping precincts, particularly in the new towns which were springing up around the major cities.

New American style supermarkets opened up all over the UK, and for many people, shopping was becoming a weekly instead of a daily excursion.

In Britain, Tesco, Safeway, Fine Fare and many other stores became household names. Most notable of these was Sainsbury’s who ensured quality throughout the selling process.

Many of these supermarkets offered shopping ‘stamps’ as an incentive to buy more goods. Stamps were given to the customer according to how much was spent in the shop, and when you had collected enough stamps, you could exchange them for gifts chosen from a catalogue.

Many British homes in the 60s and 70s had several items around the house which were bought with Green Shield or S&H Pink Stamps – Chinaware, ironing boards, kitchen appliances . . . Lots of people collected the stamps because it felt as though you were getting something for nothing. The stamps were so popular that shops had to try to out-do each other by offering double or triple stamps. 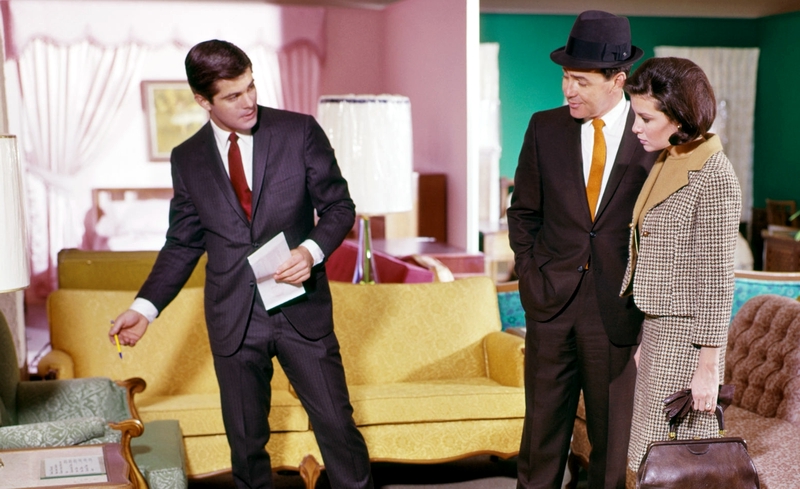 Old-fashioned ‘corner shops’ found it difficult to compete with the new supermarkets. As a result, some corner stores began to stock different types of food which couldn’t be bought in the supermarkets.

By the 1970s, many shops also had mail-order catalogues. For example, in Britain, Habitat and Mothercare. Housewives could also buy products in the comfort of their own homes at shopping ‘parties’, such as Tupperware.