In the 1950s, food storage limitations and tight budgets required frequent shopping. Only 15% of British homes had a fridge or freezer so food shopping was part of the housewife’s daily routine.

Not many households owned a car either, so most shopping was done at local shops. 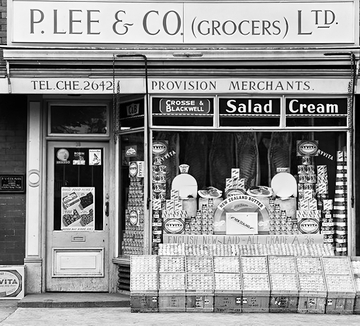 It was quite common too, for tradesmen to deliver their goods direct to the housewife. Groceries and greengroceries were often delivered each week in a motorised van and milk was delivered every day.

Most shops were family-owned businesses and traditional in character.

The butcher, for example, wore a straw hat and a striped apron, used a thick wooden chopping block and sprinkled sawdust on the floor.

Exchanging news with other customers may have reinforced shopping patterns but shopkeepers, and knowledgeable assistants, were also useful intermediaries for product and usage information.

Fresh fruit and vegetables were mainly grown in Britain (not imported), so strawberries would be in the shops for just a few weeks in the summer, and there were no fresh peas, beans or salad vegetables during the winter months.

As a result, canned food was extremely popular, stretching beyond just beans and soup to include vegetables and fruit – everything from asparagus to pineapple – to fish and meat.

In the UK, the 1950s were an important transitional period as post-WWII rationing gave way to wider choice and availability (to celebrate the coronation of Queen Elizabeth II in 1953, everyone was allowed an extra pound of sugar and four ounces of margarine!). All rationing came to an end in Britain in 1954.

But the 1950s were the age of spam fritters, salmon paste sandwiches, tinned fruit with evaporated milk, fish on Fridays and a (tinned) ham salad for tea on Sunday. 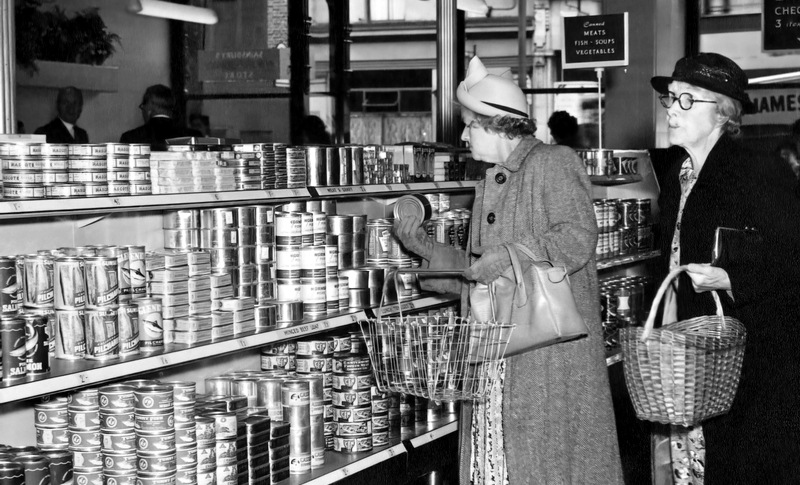 High street chains, like Sainsbury’s (pictured above), became increasingly popular during the decade because they provided good quality and low prices, but self-service supermarkets in the American style were only just beginning to be introduced. 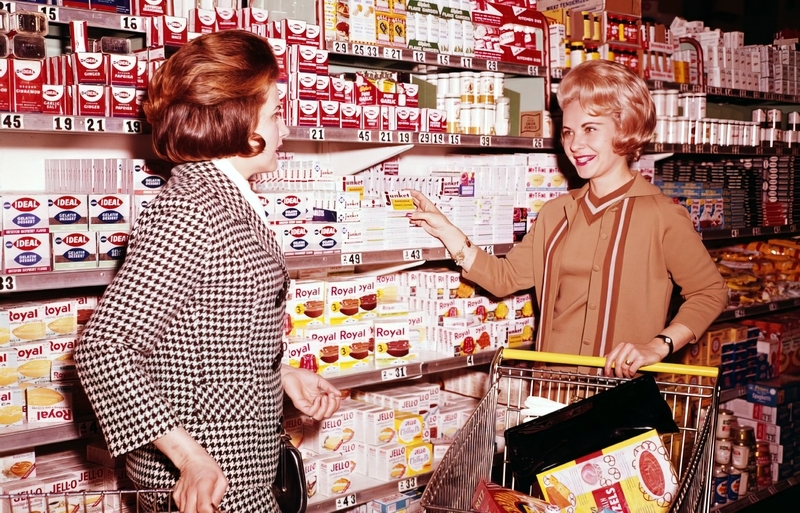 Meanwhile, in America, the new concept of self-service shopping was taking off and housewives were becoming accustomed to strolling through aisles and hand-selecting items themselves.

In the US in 1950, supermarket chains accounted for 35% of food retailing dollars. The decade saw a tremendous boost in their market share, which doubled to 70% by 1960.

Household appliances were more plentiful in the US and by mid-decade, the demand for products like frozen TV dinners was so high – Americans purchased more than 10 million of them in 1954 – that supermarkets started greatly expanding their freezer aisle.