Thorpe married Caroline Allpass in 1968 and they had their son Rupert the following year. Caroline was killed in a car accident in June 1970. Thorpe was married again in 1973, to the former Countess of Harewood, who was born Marion Stein, of Vienna,

He remained leader of the Liberal Party from 1967 to 1976 when he stepped down following allegations by a former male model named Norman Scott that they had had a gay relationship in the early 1960s when homosexuality was a criminal offence in Britain.

Thorpe had repeatedly denied Scott’s allegation, first made in the early 1970s.  In 1976, Scott made the allegations public in court during the case of a man, Andrew Newton, who was accused of shooting Scott’s dog.

Thorpe stepped down on 19 May 1976, saying he could no longer stand what he called “a sustained press witch hunt and campaign of denigration. No man can effectively lead a party if the greater part of his time has to be devoted to answering allegations and countering plots and intrigues”.

In 1977, when Newton was released from jail for illegal possession of a firearm and intent to endanger life, he said he had been hired to kill Scott and implicated Thorpe and three other men in the plot.

Police investigated and arrested Thorpe, who was still a member of parliament. A jury acquitted him and the three others, but Thorpe’s career was finished. He lost his seat in the 1979 election. In Thorpe’s 1999 memoirs he called Scott “a victim of delusions”.

Jeremy Thorpe died on Thursday 4 December 2014. He was 85 and had lived with Parkinson’s disease for more than 30 years. 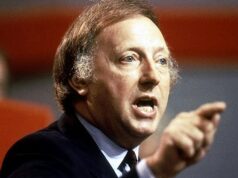 Angela - the gold cursive script dangled from a dainty gold chain and nestled in the tanned hollow between her collar bones. Jayne - the letters sparkled...

Reliant commissioned Ogle (their design consultants) to produce a sports 3-wheeler for the "young generation". This was to be sold under the Bond name as...

Parker Brothers designed and launched Gnip Gnop (read it backwards to see how they came up with the name) in 1971. Gnip Gnop (pronounced "guh-NIP guh-NOP")...

William George Hayden was born in Ipswich, Queensland, the son of an Irish-American sailor. He was educated at Brisbane State High School and served...