The Dansette record player became an iconic artefact of the youth culture of the 1950s and 1960s, and the name became used as a generic term for many different makes of compact or portable record players.

The introduction of electronic recording and reproduction via loudspeaker tethered the record player to a power outlet, and its status as a piece of furniture led to larger and more ornate machines that sat proudly in living rooms. 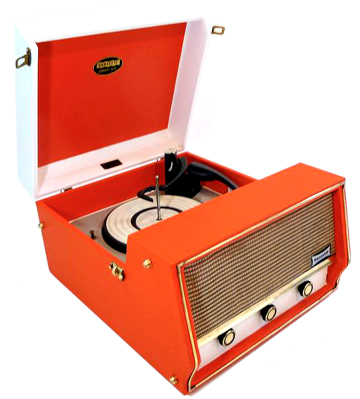 In 1950, Morris Margolin’s British company (J&A Margolin Ltd) returned to the earlier format of a compact player encased in a suitcase (complete with strap handle) with the loudspeaker incorporated into the lid.

They called it the “Dansette”.

The turntable had three speeds – 78, 45 and 33 RPM – to suit all the records available. But the growing popularity of the 7-inch 45 RPM single made the Dansette the choice of teenagers who wanted to play their singles in the privacy of their own bedrooms.

Dansette introduced a large number of models to keep up with contemporary taste and to cover a wide section of the market.

The leatherette-covered Dansette came in a variety of bright colours, which made them especially attractive to young women, and some models (the RG30, RG31 and RG65) came with built-in transistor radios.

In 1961, following a decade of success, the company floated on the stock exchange and changed its name from J & A Margolin Ltd to Dansette Products Ltd.

Despite their eye for popular style, the Margolins could
not compete with growing imports of portable record players from the Far East and Dansette’s run of success came to an end in 1965 when the company posted a profit of just £8,000 compared with £118,000 for 1964.

The Dansette Board fought back when they acquired Perdio radio in December 1965 and the company was briefly profitable again.

But sales continued to plummet and the Dansette company folded in 1969. The Rank Organisation bought the name and continued to make record players branded “Dansette” in the early 1970s.

Today, Dansettes are highly prized by collectors and enthusiasts of 1950s’ and 1960s’ music. The models which command the highest prices are those that most evoke Dansette’s heyday – the two-tone models from the late 1950s and early 1960s.