It seemed the whole world had stopped. Then, clear as crystal, came those immortal words . . . “That’s one small step for man – one giant leap for mankind”. The speaker: American astronaut Neil Armstrong. The place: The Moon.

It was 20 July 1969, and Armstrong, commander of the Apollo 11 mission, had just become the first human to set foot on the surface of the Moon.

As he stepped down from the landing craft, he told the hundreds of millions watching the scene on television, “That’s one small step for man, one giant leap for mankind.”

“The surface is like a fine powder” he reported. “It has a soft beauty all its own, like some desert of the United States”.

Soon Armstrong was joined by fellow astronaut Edwin “Buzz” Aldrin and the two experimented with moving in the moon’s low gravity, collected samples of dust and rock, took pictures and planted the Stars and Stripes before returning to the lunar module.

There had been a tense final few minutes when they had to avoid a boulder-filled crater during their descent to the surface with fuel running low. As the lunar module touched-down, Armstrong said “Houston, Tranquility Base here. The Eagle has landed”.

His feat, and that of his crew-mate, USAF Colonel Edwin ‘Buzz’ Aldrin was and still is the most memorable moment since the space race began in earnest towards the end of the 1950s.

During Armstrong and Aldrin’s excursion on the moon, USAF Lieutenant-Colonel Michael Collins remained on board the Apollo 11 Command Module, Columbia.

The three astronauts returned to Earth on 24 July, but the four-legged descent stage of the Eagle Lunar Module was left behind on the surface of the moon. On its side is a small plaque which reads, ‘Here men from the planet Earth first set foot upon the moon, July 1969 AD. We came in peace for all mankind’.

Shoulder patches and medals were also left on the moon, as well as a silicon disk which had been etched with messages from the leaders of 73 countries.

The errand of the Apollo astronauts was completed, just eight years after President John F Kennedy first proclaimed the USA’s intention to put a man on the moon – and only five months before the end-of-decade deadline he imposed.

To the disgust and indignation of NASA and the astronauts involved, sceptics would continue to claim that the TV coverage and photographs, and perhaps the whole trip, had been faked – mocked up in the Nevada desert for Cold War propaganda purposes.

“This is the greatest week in the history of the world since the Creation”
Richard Nixon, greeting the returned moon astronauts 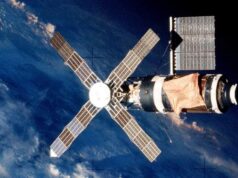 Freddie (originally 'Freddy') is often named as one of 'the Three Kings' alongside BB and Albert. Not as well known today, at the time he was...

Tony Seymore (Alexander Davion) relates the story of how he was asked to investigate the whereabouts of Richard Fountain (Patrick Mower), an Oxford student...