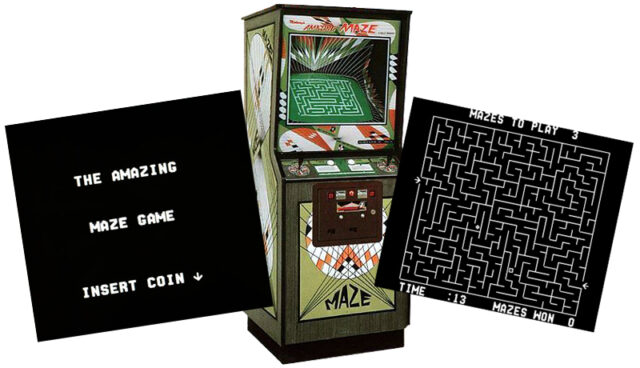 The deceptively simple concept of Bally Midway’s Amazing Maze – released in 1976 – was this: You were on one side of a maze, and you had to get to another.

It sounded no different from what you might find in any puzzle book, except for one thing: Amazing Maze was competitive. It’s one thing to find your way out of a maze; it’s another challenge entirely when you’re racing an opponent.

The game console had dual joysticks to allow for one-on-one play with a friend or rival, but Amazing Maze had a one-player option as well.

This didn’t get you off the competitive hook, however. A computer-driven opponent made sure you kept from dawdling and sprinted your way to the other side, trying to win each of the three mazes.

Taking its cue from many sci-fi and horror movie villains, the computer opponent was slower than you, but it never broke stride and never made a wrong turn.

The black-and-white Amazing Maze showed that classic concepts could not only survive in the video age, they could blossom and thrive in previously impossible ways. More than that, the game proved that the simplest ideas were often the best. Bouncy, boisterous and thoroughly unstuffy, Sarah Ferguson seemed the ideal partner for Prince Andrew, the Queen's second son. Andrew had delighted his mother and the...

Launched in 1958 by Minimodels, Scalextric promised to "bring the excitement of motor racing right into your home where children and adults alike can...

The first version of Yahtzee was invented by a moneyed Canadian couple in 1956 aboard their yacht, of all places. Among the couple's boating coterie,...