World War II, cowboys and soccer were the tripod on which boys’ comics were built in the 1950s and 1960s.

DC Thomson and Fleetway were in tough competition with their comics, although Thomsons were clear winners with their ageless twins, The Dandy and The Beano which had no real counterparts.

Fleetway, meanwhile, led easily with their nursery comics, Jack and Jill, Playhour and Harold Hare against Thomson’s Bimbo and Longacre’s Robin, which were all prettily produced in colour. 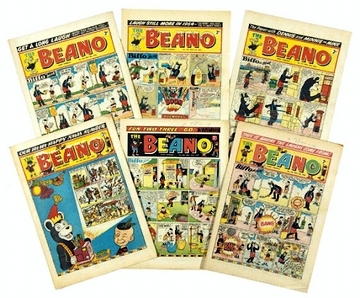 The comics presented a world of constant, dependable friends and reliable traditions. Easter always brought loads of adventures involving eggs. In August, the sun always shone on the sands, the cliffs, the lighthouses, the sparkling sea and the crabs.

In November, the pages and the title whirled with sparks and whooshing rockets. And at Christmas – apart from slap-up feasts of spherical puds and cigars – there would always be snow on the lettering and a cascade of presents and overflowing stockings, often distributed from the open cockpit of a plane by a genial Santa Claus.

The comics shared a common vocabulary of emotive words like “Tee-hee”, “Haw-haw”, “Aaargh”, “Gulp”, “Zzzzzzzz”, “Yikes”, “Splat”, “Eeek”, “Yeeow” and “Glub” (as when sinking into a pool of mud) and a shared approach to food – someone was always being rewarded with a “slap-up” meal or a “good tuck-in”, usually involving a chicken leg, a slice of fruit cake dripping with icing, or a pile of bangers and mash where the sausages stuck out of a mountain of mashed potato like fat fingers. 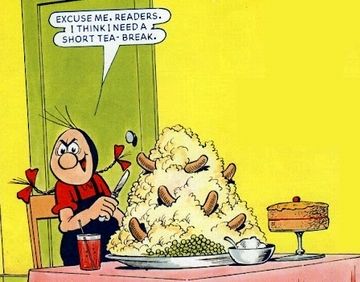 Reading them required, of course, a complete acceptance of people rolling downhill engulfed in a monster snowball; of dogs, snakes, horses, bears and ostriches being able to talk; and of lightbulbs hovering over people’s heads containing the word “Idea”.

The creators of these comics knew instinctively an adolescent’s subconscious desire to become invisible at will, or to fly like a bird, or to wipe the floor with the opposition by an amazing display of skill at football, cricket, running, boxing or pole vaulting. And so stories involved anti-gravitation bracelets or cream to make you invisible, or mysterious masked players leading a flagging team to victory (sometimes it wouldn’t be a masked player, but a kangaroo or a robot).

Young readers wallowed happily through jungles, cities, prairies and lost planets, in the company of people (or robots) who grappled with pterodactyls, stopped villains in their tracks with a freezing ray, leapt over double-decker buses, averted tanks by smearing ice cream over the road, burrowed through the earth in a vehicle like a giant oversized wood screw, hacked at the tentacles of giant squids coiled around ocean liners, or beat off several thousand baffled tribesmen with nothing more than a cricket bat. 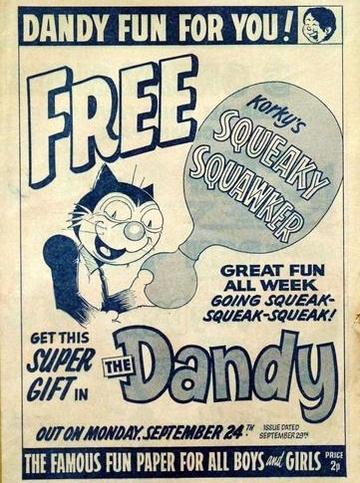 Heroines had names like Hetty, Bubbles, Cherry and Babs and male relatives called Jago, Rodney and Pongo (the latter usually reserved for an obnoxious brother). But above all, girls seemed to have a penchant for forming secret societies.

Skillfully woven into the exciting yarns about the mysteries and japes befalling house captains, prefects, ballerinas and ice skaters were impeccable moral codes. Impressionable young readers were left in no doubt whatsoever about the difference between right and wrong. It was a world where cheats, liars, spiteful girls and sneaks were never allowed to prosper; where good always triumphed positively over evil, leaving no messy grey areas to blur standards.

To maintain loyalty and to encourage new readers, the comics often gave away Exciting Free Gifts – the cardboard gun that fired elastic bands, the paper fish that told your fortune by curling up in the palm of your hand, the balloon beeper, the Super Squirt Ring, the Terrifying Bull Roarer, the whizzing disc, the mirth-provoking nail-through finger joke and hundreds of others.

This is not an exhaustive listing of British comics from the 50s, 60s and 70s. It is a recollection of some of the comics which are either personal favourites or which are particularly representative of the era or genre.