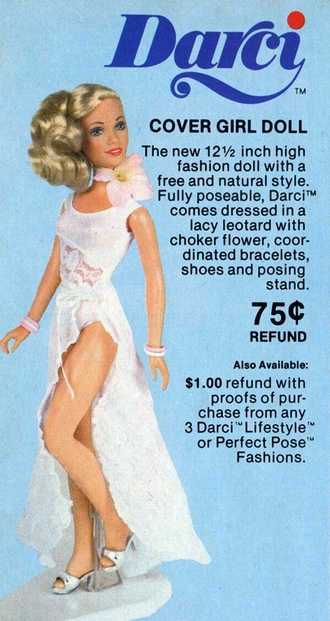 Kenner dipped its foot into the dark, monopolised waters of the late 70s toys-for-girls market with Darci.

She was a bit taller and a bit more poseable than Barbie, thanks to bendable arms and the ability to perform gymnast-like splits.

Blonde, brunette and redhead Darcis were available, and Princess ‘D’ had two close friends to hang around with on the toy shelves: Erica and Dana.

Unlike Barbie (who had many jobs) every Darci doll was a fashion model, and each came with a sexy but well-made outfit, a vinyl portfolio filled with three of her magazine covers, doll-posing instructions, and a patented Darci stand so that your lovely model would always be perfectly poised.

In 1981, they introduced the Fashion Fragrance Darci, which came dressed in a bathing suit with a wrap skirt and white mules, and of course, came with a little bottle of perfume.

The playsets that Darci frolicked in included a Perfect Pose Studio (replete with rotating modelling stand, a camera that the doll owner could peer through and of course, a moveable spotlight) and her very own Fabulous Disco (a pinball machine, a disco ball, and once again, a moveable spotlight). 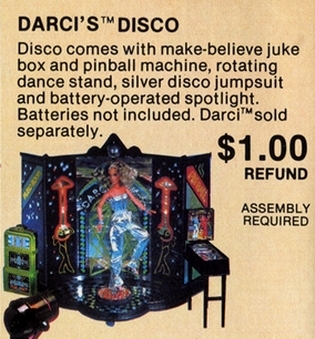 In her first year, Darci was lavishly advertised, and fancy store displays and print ads pitched her more as a real model than a toy doll. Though sales were brisk in her inaugural year, Darci ultimately couldn’t stay afloat in that Barbie-saturated marketplace.

The consolation is, today she’s widely adored in collector circles because of her craftsmanship, her quality wardrobe, and ironically, her limited run of production.

Perusers of supermarket checkout displays will be familiar with the standard arrays of Kit Kats, Who Magazine's 100 Most Infuriating People Who Are Already Famous and Little Golden Books. One of their biggest-ever sellers is The Poky...

1 8 9 3 - 1 9 7 6 Mao was the son of a peasant farmer and was born in the village of Shaoshan in the Hunan province of China. He had an elementary classical education in...

For more than 10 years, the Reverend Jim Bakker - who frequently said: "God wants his people to go first class" - was at the helm of open of America's fastest-growing Christian media empires, serving...

The flower children hippies of the 1960s let go of convention and shrouded themselves in soft and fluid fabrics when they adopted the gypsy style wardrobe. Angel (or bell) sleeves - think bellbottoms for sleeves - dripped from the arms...