From Ideal . . . Ker-Plunk! took a steady hand, as you slowly (or really quickly) remove the sticks from the marble-filled tube.

A clear plastic tube was filled with marbles, which were supported by crisscrossing sticks inserted through the tube. 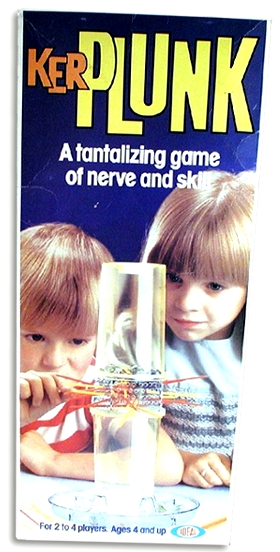 Each player took a turn to remove a stick from the tube, trying to dislodge as few marbles as possible.

As the game progressed and fewer sticks remained it naturally grew harder to keep the marbles from going Ker-plunk!

Play continued until all the marbles had fallen (or your sister accused you of cheating by bumping her and/or the table).

The player with the least marbles in their compartment at the end was the winner.

Like Buck-a-roo and Mousetrap, Ker-Plunk was one of those games which used as many plastic bits as possible, thus ensuring they were unplayable after three days because bits would invariably go missing.

You can still buy Ker-plunk! (now from Mattel) but the tube and tray (and sticks) are made of much flimsier plastic.

With the modern version, you have to hold the tube as you pull the stick out or the whole thing falls over – Where’s the fun in that?

Toy company Hasbro was impressed with two toy-lines at the Tokyo Toy Show in 1983 - Takara's Microman and Diaclone - and sought to pick them up for the Western market. Concerned about launching two...

Roller skates are an ultimate icon of the 1970s - but the first demonstration of roller skates in Britain actually took place 200 years earlier. Just as people were starting to get used to dodging Space...

He didn't sing, play or write songs, but Jerry Wexler (born in 1917) changed music significantly more than most people who could do all three. His roles - reporter, A&R man, producer - conceal an...

Nobody knows when the first proto-Hot Potato game was played (possibly by 18th-century Irish kids with real scalding potatoes - we're just guessing), but by the 1950s, manufactured Hot Potato games were already on store...

The jumpsuit was first produced in 1913 as the Lee-Union-All, created by the H.D. Lee Mercantile Company. The one-piece suit would become the official military doughboy uniform, or flight suit, during WWI, and the revolutionary...