In 1977, Martin Abrams of the Mego toy corporation was in Japan negotiating with a company called Takara for the right to produce a version of a toy called Microman in the United States. Busy with the negotiations, Abrams turned down the merchandising rights to a little science fiction film from 20th Century Fox called Star Wars.

By now everyone knows how that one turned out. Mego missed out on the merchandising bonanza of the century and were left, instead, with the licensing rights to the Japanese toy, Microman. Later that year, Mego’s Interchangeable World of Micronauts became a reality in the United States.

The Micronaut line was a complicated series of figures, vehicles and playsets that, as their extended name suggested, had interchangeable parts that could be combined to create numerous variations on their original forms.

As a form of back-story, the packaging indicated that the Micronauts were microscopic and lived in a microverse too small for the human eye to see.

The smaller of the figures had articulated elbow, shoulder, wrist and knee joints as well as a swiveling head. Some were made of plastic, but many were made of more substantial painted die-cast metal. The smaller figures had well-sculpted silver metallic human faces and a unique hairstyle that could arguably be described as ‘early Elvis‘.

As figures, they were far more sophisticated than their Star Wars toy counterparts, whose elbow and knee joints were permanently fixed in one position. This meant that Micronauts could be posed as though they were running. 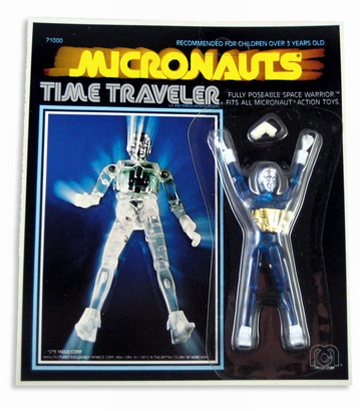 The most basic of the 3½” figures was the Time Traveler, made out of translucent plastic that came in various different colours.

Time Traveler was essentially the serf of the Micronauts universe.

Slightly cooler than Time Traveler was Pharoid, which was basically Time Traveler with an opaque chest and highly cool Time Chamber (an Egyptian style sarcophagus), and for extra style points, his chest glowed in the dark.

Galactic Warrior was the next step up, having a die-cast body and shiny metallic limbs.

He also came with an oversized gun that shot out a rubber-tipped projectile at would-be Micronaut enemies.

Galactic Defender, Warrior’s stay-at-home counterpart, was all plastic but had a nifty set of accessories, which included a laser gun, sword, jetpack and cool blue see-through helmet. Defender was the flamboyant one of the bunch. 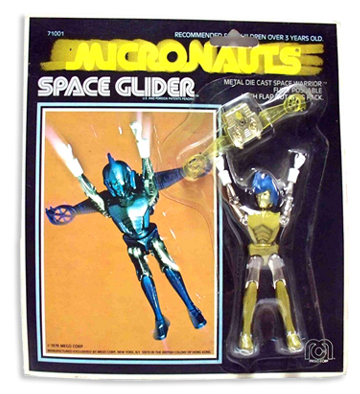 But the best of the 3½” figures in the Micronaut ‘good guys’ line was Space Glider. An all die-cast figure, Space Glider came with a backpack assembly that, when activated, sprung small plastic translucent wings. The pack was a little on the delicate side, and often the button on the backpack would cease to free the wings, but until Glider broke, he was a serious favorite of Micronaut denizens.

On the evil side there were two main figures in the 3½” size: Acroyear and Acroyear II.

Acroyear was a fierce-looking metal and plastic figure on oversized rave-style roller-skates and a metallic pink short sword. Unfortunately, his knobby knees had some difficulty supporting his upper body weight and he had a tendency to fall over. He was no disco skater.

Acroyear II didn’t have the skates but was equally prone to falling apart at the slightest provocation.

There was also a series of giant figures. Mostly made of plastic, the giant figures typically had motorised parts that allowed them to move by battery power. 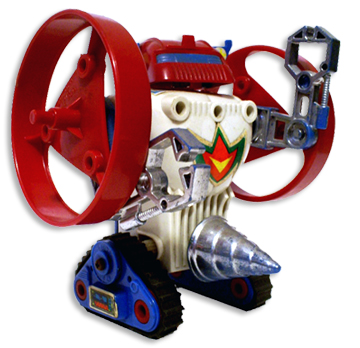 Microtron looked a little like a combination of R2-D2 and a tank. His squat body was crowned by a devil’s head (although he was a good guy) and supported by triangular feet that had motorised rubber tread on them.

Microtron’s evil side was Nemesis, who looked fairly similar, save for a few minor physical differences and purple colour scheme.

Giant Acroyear was all fighting: half of his body could become projectiles at any one time. Biotron was the largest and most powerful of all the Micronauts. His comparatively massive figure and large silver gleaming noggin made him the most intimidating battle horse for the good Micronauts. Biotron was opposed, in brute strength and size, by Phobos. Blizzard was another figure in the line but was less readily available in the US.

Rounding out the figures in the Micronauts line were two major characters that presumably were meant as the leaders of their respective troops. Baron Karza and Force Commander were known as ‘magno’ figures, owing to the fact that their joints at the hips, shoulders and neck were made of a magnetic housing and metal ball-joint assembly.

Not only did this allow for 360-degree rotation of the joints, but the limbs and head were also detachable, leading to many Picasso-esque reconfigurations of their bodies.

Force Commander (leader of the good Micronauts) was white with a nicely detailed helmet and could be purchased with a magneticly-abled horse named Oberon.

Karza was all black and suspiciously Darth Vader-like in appearance. Like his counterpart, Karza had a matching black steed named Andromeda. There were other ‘magno’” figures made, but they may have only appeared in Japan or in later incarnations of Micronauts.

The figures were accompanied by numerous vehicles and three complicated city sets. Hydro-Copter, Battle-Cruiser and Mobile Exploration lab were the biggest and most elaborate of the vehicles, but there were nearly a dozen other vehicles produced over several years.

All of the vehicles had sitting space for Micronaut figures, and most had interchangeable parts, leading to seemingly limitless Frankensteinian combinations.

The cities – maybe the most impressive (and expensive) addition to a Micronauts collection – were astonishingly baroque productions and looked like miniatures from the set of Logan’s Run. Rocket Tubes sent figures careening around inside tubular clear plastic at breakneck speeds using air pressure.

Micropolis Megacity and Stratastation, both changeable playsets with motorised parts, offered something valuable for the Micronauts to be defending against the evil invading forces of Baron Karza.

One of the keen marketing ploys of Mego with Micronauts was to include an insert in every Micronaut box that folded out to reveal very snazzy pictures of every Micronaut ever made. It was impossible to resist the temptation to nag parents daily about getting all the Micronauts that you didn’t have.

It also became necessary over time to replace certain Micronauts that had a habit of getting permanently injured. The moveable joints were a boon to playability, but they often became too loose to support the weight of the figure.

And, as many children discovered, the smaller Micronaut figures had a small thick rubber band that kept the torso and hips connected, allowing for full articulation of the waist. Eventually this rubber connector stretched to the point where it appeared as if the Micronaut in question had a slipped disc.

By the late 1970’s and early 1980’s, most action figures had moved to the 3½” size, making Micronauts compatible with other toys. Micronauts could fight against characters from the Star Wars and Shogun Warriors lines or any other of their contemporaries.

Even though Micronauts were wildly successful in Japan, and even though Marvel released a comic series based on the toy, Micronauts simply could not compete with the Star Wars juggernaut. Neither could Mego Toys.

Their other toy lines were no longer successful, and Mego president Martin Abrams was indicted in 1982 for tax fraud. Later that year, Mego declared bankruptcy, but the once giant toy company had already ceased production on the Micronauts line after a final attempt with a series of plastic aliens and vehicles.

Another company bought the Micronauts license and molds from Mego and released exact replicas (with different colour schemes) under the name of The Inter-Changeables, but the neo-Micronaut line was not successful. And yet another late, great toy was lost.