Ricochet Racers were just cooler than cool – well, the bloody big gun you fired them out of was.

Putting the cars into the cartridges, loading the gun with three cartridges, cocking that big plastic bolt, and then that deeply satisfying banging sound of spring-loaded plastic hitting another bit of plastic as you fired.

The only problem was that about 50% of the time the empty cartridges didn’t self-eject like they were supposed to, so you had to fish them out manually.

The gun came packaged in a Marksman Set (the original), a Western Set (with a “honky tonk saloon target”), a Super Duel Set (with two jump ramps and a silver dollar target) and even a Spiderman Set (with a spider web target). 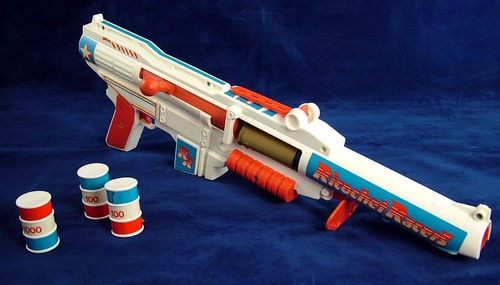