With all due respect to astronauts and other childhood idols, the 1960s belonged to the secret agent. The adventures of James Bond, Matt Helm and Derek Flint dominated cinemas, while television screens overflowed with the likes of The Man From U.N.C.L.E. and The Avengers.

After a few weeks on this steady diet of all things espionage-related, no more convincing was needed: we wanted to become secret agents. Toy companies did their best to make this wish come true by creating nifty spy toys.

Most of these toys were tie-in items directly related to characters like James Bond, but some toy companies got in on the action with their own original toys. One of the most popular spy toy lines not directly tied in to a television or movie character was the Secret Sam toy line produced by Topper Toys in the mid-1960s. 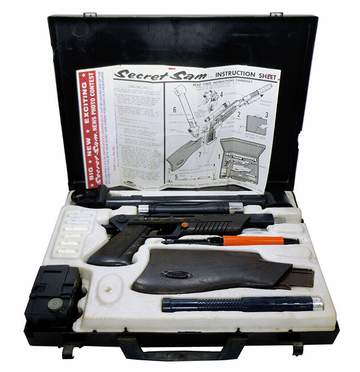 These toys didn’t have an instantly recognisable character to use in their promotion, so they took the novel approach of using kids to be their spy heroes. The company pulled this off by producing commercials that looked and felt like spy adventures but had kids in trench coats and sunglasses acting out the traditionally adult roles of secret agents.

This slick black attaché briefcase was actually a disguise for an elaborate spy gun. The secret weapon could be used as a pistol but also had a detachable stock and barrel that could convert it into a rifle. A silencer was included for those covert missions that took place in risky public situations.

The gun could also be rigged to fire from within the attaché case itself. If the agent using the case got in trouble and needed to send an S.O.S., the case also featured a message missile that could be launched from within. If the agent needed photos of their daring deeds, there was a real working camera concealed in the case to take pictures.

The Secret Sam Attaché Case proved popular with spy-besotted kids and led to further Secret Sam items. For instance, there was the Pipe Shooter. It looked like a normal pipe, but it contained a secret mirror where the tobacco would normally be held. If the pipe-smoking spy saw something dangerous, he could aim the pipe at the danger and fire a projectile at it out of a hidden slot by clenching the stem with his teeth.

Another popular item was the Bomb Binoculars device, which functioned both as a binocular set and a deadly explosive. And then there was the double-threat Shooting Cane: press one button and the plastic lion on the top would shoot a missile from its mouth; press another, and a cap-loaded bomb would drop from the bottom. Villainy didn’t stand a chance.

As the 1960s wound to a close, so did the spy craze. Topper stopped making Secret Sam items around this time, but their classic Secret Sam toys continue to be favourites with collectors today thanks to their combination of nifty features and slick design.

Even today, Secret Sam Spy Toys have enough nostalgic value to take a person back to the days when operations were covert, martinis were shaken not stirred, and secret agents had all the cool gadgets worth having.

Winklepickers: such a strange name for the pointy-toed shoe of the 50s and 60s. To understand the lore behind the winkle picker shoe, you, dear visitor, must understand two things: 1. A winkle is a shellfish...

The peace-loving hippies shared their love with each other, and as a sign of their affection for fellow human beings, they wore love beads. Handmade beaded necklaces were the universal symbol for brotherly love and acceptance. Love beads...

Op Art, Pop Art, Miniskirts and Mod; Bobs, Boots, paisley and eye-liner four inches thick . . . "The Swinging Sixties" and "The Roaring Twenties" were the only decades to be given names that instantly conveyed the lighter side of...

The 2-XL was a "robot with a personality" manufactured and released by Mego Corp. in 1978. This small 'talking' robot came complete with an 8-track cartridge and a voice that sounded like Lou Costello. On the box,...

Israeli Labour politician and prime minister from 1974 to 1977 and 1992 to 1995. As a former soldier, Rabin was a national hero in the Arab-Israeli Wars (he also served as minister for defence under the...