If there was ever a television series that demanded a toy line for its merchandise, it was The Six Million Dollar Man. 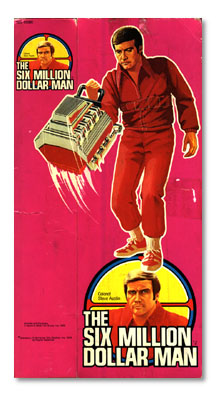 The Six Million Dollar Man toy line began in 1975 with the release of the Steve Austin figure. Most doll-style action figures from this era usually ranged between 8 and 12 inches in height, but Steve was a whopping thirteen inches tall.

For starters, Steve had a telescopic bionic eye that a kid could look through via a small eyepiece in the back of his head. He also had plastic skin on his right arm that could be “rolled” back to reveal removable mechanical parts beneath it.

The coolest of the features on the Steve Austin doll was his bionic strength. If the owner twisted Steve’s head and pushed a button on his back, his right arm could lift up to two pounds.

This feature was made even cooler by the fact that the figure would make “bionic sounds” while Steve was lifting. A miniature car engine was packaged with the figure for further strength demonstrations.

Any action figure with this many cool gadgets is bound to be successful, and the Six Million Dollar Man did not disappoint. The Steve Austin figure was a big hit and would be remade more than once. 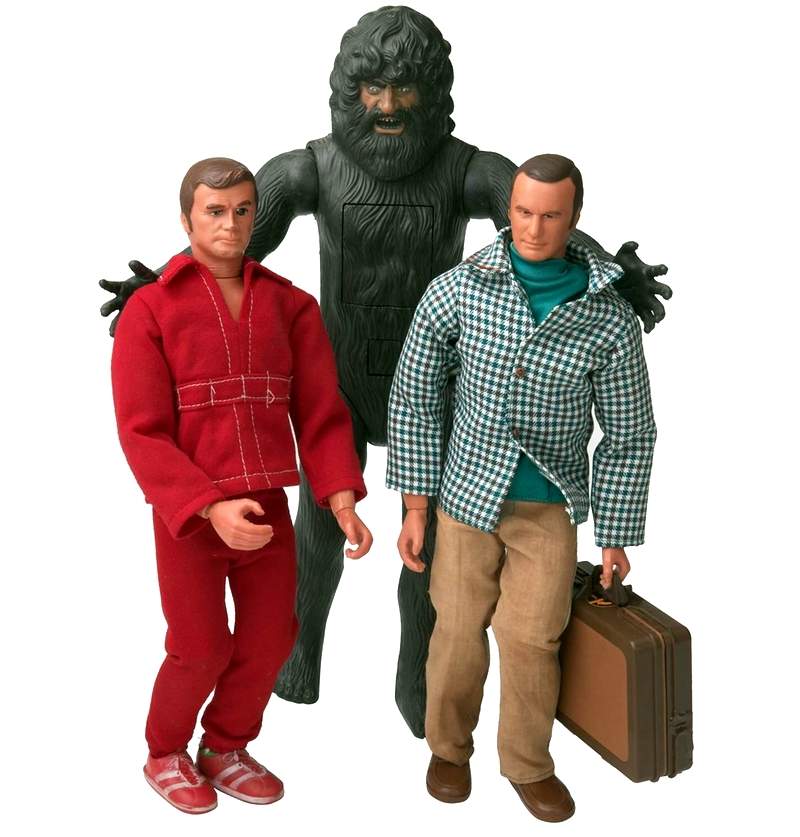 The first reissue came in 1977 when a new Steve Austin figure was released. This updated Steve boasted a nifty new feature in its ‘Bionic Grip’. In other words, the right hand would grip an object tightly when a button was pressed on its right arm. A miniature steel girder was also included with this figure so Steve could demonstrate his gripping talents.

A third reissue of the Steve Austin figure included a “’Biosonic Arm’” that could chop objects with great force.

Steve Austin’s success as an action figure quickly led to a plethora of accessories. He had a Back Pack Radio that included a real built-in crystal radio. There was also a Porta Communicator backpack that allowed young Oscar Goldman wannabes to transmit their orders to Steve via a radio microphone and broadcast them through the backpack.

There were a series of outfits known as Bionic Adventure kits that gave Steve mission-specific clothes and accessories. Examples included Mission To Mars and OSI Undercover Assignment.

Finally, there were Critical Assignment Arms and Legs that could replace Steve’s limbs to give him extra power for those especially demanding assignments.

The success of the Steve Austin figure also led to a variety of other companions. The most popular was the Bionic Woman doll, which came with ‘Bionic Hearing’ (if her head was twisted, it would make a bionic-sounding noise) and a Mission Purse stuffed with miniature high-tech spy goodies.

Kenner also made an Oscar Goldman figure, dressed in a funky jacket and green turtleneck sweater and packing a special “Exploding Briefcase”. (basically just an optical trick – if you opened it a certain way, it would reveal an interior that looked like it had been scorched by an explosion).

There were also plenty of villains for Steve to square off against. There was the Bionic Bigfoot (which had a removable chest plate that revealed a bionic display built into the figure), but the ultimate nemesis for Steve Austin was Maskatron. 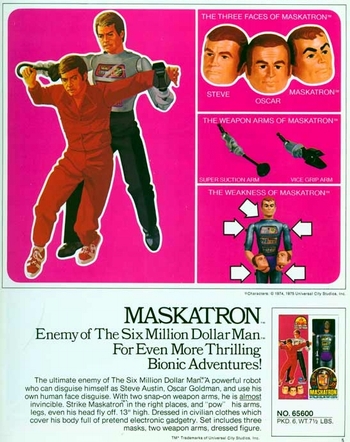 This devious cyborg came with a plastic human mask to cover its robotic face and additional masks that allowed him to disguise himself as Steve or Oscar.

Maskatron also had an all-mechanical torso and removable arms that could be replaced with creepy futuristic weapons.

The Bionic Woman would later receive a similar nemesis in the Fembot figure. This feminine variation on the Maskatron came with disguises that included a Bionic Woman faceplate and wig.

The Six Million Dollar Man toy line included plenty of playsets that provided groovy futuristic backdrops for all the bionic action that the toy’s owners could dream up.

The Bionic Mission Vehicle was a sleek, aerodynamic vehicle that Steve drove under a shield of bubble-like plastic while the Bionic Transport and Repair Station allowed Steve a chance to recharge his circuits. The latter also doubled as a compact carrying case.

The Command Console and the Mission Control Centre gave Steve a base of operations, and even Oscar Goldman got in on the action with his OSI Headquarters playset.

Finally, there was the Venus Space Probe. This spacecraft also doubled as an alien that provided another nemesis for Steve.

As the popularity of The Six Million Dollar Man television show waned so did the popularity of the toys. They were quietly discontinued as the show went off the air, but they remain favourites today with toy collectors and fans of sci-fi television.