It was every parent’s nightmare. A seemingly endless stream of plastic figures that were just affordable individually, but for which you’d need to take out a second mortgage to complete the set.

Dozens of figures were produced in at least two different sizes, along with scale models of hardware from the film and electric guns that emitted a series of ear-splitting death tones – at least until you played with them in the rain.

Just as it seemed there couldn’t be a single thing left to exploit from the 1977 film, the sequel The Empire Strikes Back (1980) was released! 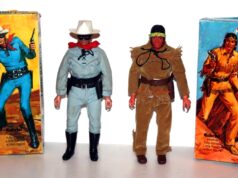 Like no other time before, the ’60s exploded into personal freedom and self-expression, seen through bands of teenagers with unique — and remarkably different...

Ice lollies and choc ices on sticks became a major market during the 1960s. In the UK these were mostly produced by Walls and Lyons...

George Bush graduated from Yale University in 1948, after wartime naval service. He made a fortune in the Texan oil industry before entering politics to...

The TV advert starred Norman Beaton: I'm a Jamaican ginger grower and I very proudly say I grow the finest ginger in the world today I picks...