What 70s child (well boy anyway) hasn’t heard of Subbuteo? “Table football” goes the cry, “Just flick to kick”, is another catchphrase. How many of us owned a large green box that was Subbuteo? Inside, this seemingly huge green box could be found, a pitch, two goals, two teams and two balls with which to play.

Although the actual game could be tortuous stuff (with the actual method of flicking-to-kick frequently resulting in the players and ball going off the side), Subbuteo was the closest thing to the real thing. The rules were simple:

1. Flick with your fingernail placed flat on the table
2. No more than three flicks per player at one time
3. Goals only count if shot is within “shooting area”

Collecting the accessories could be a full-time job too: TV tower with commentator sat on a box, dugout with leather/fur coat-wearing manager (when did they all start wearing horrible Umbro sports jackets?), corner kickers, orange Adidas Tango balls and fence surround (which prevented the ball going off the side). 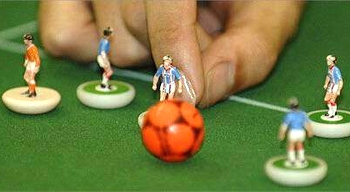 The Astropitch was the pitch stuck to a plastic base, thus preventing the need to iron the pitch after you laid it out.

Nothing quite like the annoyance of having non-straight pitch markings! And despite the name “table football”, most of the time – probably 90% of the time if the truth is known – Subbuteo was actually played on the living room carpet.

It was here that the pitch was smoothed out time after time, and where the cat jumped on, and then ran off with, the ball.

It was also here that many a boy cried out in agony as he knelt on his favourite player and then fell back only to sit on one of the goals.

In fact, this is how many of today’s collectors find the sets that turn up in car boot sales or charity shops, ie minus two or three players no balls and with the goals squashed.

Buying Subbuteo to most meant going to a local toy or sports shop and staring longingly at all the green and white team and accessory boxes that seemed to fill an entire wall of the shop.

I personally can still remember picking out Brazil, Eintracht Frankfurt, Austria Vienna and Peru. All of these chosen not because of any great World League set-up or European cup competition, no, simply because the kits looked great lined up in the bright green inner trays of the team boxes! Everyone was catered for during Subbuteo’s “Golden Era” of the 70s.

There were around 320 different teams to choose from, plus numerous accessories such as the FA Cup, World Cup, shooting target board, floodlights, stadiums, scoreboards, cameramen, referee and linesmen.

There were even special figures used for corner kicking and throw in taking. truly a complete game by any standards.

The word Subbuteo is often misrepresented. Many people think it is something to do with the game of football, maybe an acronym constructed from different words, shoot, boot etc etc. In fact it comes from the Latin name for the bird of prey, the Hobby Hawk (Falco Subbuteo Subbuteo) which was the favourite bird of the game’s inventor, Peter Adolph.

Subbuteo Sports Games, as the company was called, started up in 1947 and the table football version was still being made in 2002, (albeit in a very reduced format), some 55 years on!

In its heyday, Subbuteo Sports games actually made, Table Football, Table Cricket, Table Rugby, and Table Hockey, plus some other games such as Speedway and Angling. How many people bought the Angling game thinking it would be “Flick to Fish” only to discover it was a mere board game?

Further disappointment would have been universally shared when the living room lights were switched off and the game’s floodlights switched on. Yes, you guessed it, near complete darkness! There is no way on this Earth that a game could be played under those floodlights (even if you put 6 million volts through ’em). For those of you who played this most magnificent game all those years ago, think back. Did you have a league running with your mates? Did you paint over your players to add that extra stripe or number that individualised your team? How many of you cheated by shoving instead of flicking? And how many of you flicked the player that hard that he flew off his base and ended up in the back of the net instead of the ball?

Maybe one day your sons will kneel on their favourite player and step on a goal, have a massive argument about whether their keeper was ready or not, and then moan when the floodlights don’t live up to expectations, life tends to go full circle, maybe it will be you he’s arguing with!

So what has happened to all those green boxes? Why do we not see Tale Cricket or Rugby in the shops any more?

More importantly, why do we hardly ever see Table Football on the shelves any more? Simple really, computer and video games.

Modern boy doesn’t want to crawl around the living room floor risking holes in his knees. He doesn’t want to have to think tactically and to expend some energy flicking the ball into the opponents net.

Now its all done for him, with fantastic life-like graphics and the ability to pick almost any team or player he wants. All that he has to do is sit in a chair and turn the game on. Easy.

Thanks to Jon Shelley