Many of the truly classic games and toys of the 50s, 60s, 70s, 80s and 90s are still around today, albeit in a much-altered form. The ‘modernisation’ process usually means they are flimsier, cheaper to make and mostly made of plastic.

Some just have new packaging and others have gone back to their original, old-style retro packaging – which basically means they cost more.

But many of the games and toys of our youth are gone forever now – and nations of 30, 40 and 50-somethings lament that they didn’t keep these once magical items in pristine condition.

A quick garage sale of the lot today on eBay would probably result in enough cash to retire to the Bahamas in decadent luxury. And can you imagine any kids today being entertained by something that doesn’t make a noise, isn’t run by a computer, doesn’t emulate a violent act and doesn’t cost a hundred quid?

If anyone ever successfully constructs a time-machine, you can forget about going back and stopping WWII – I’ll be nipping back to stock up on Matchbox cars and lead soldiers . . .

Toys in the Sixties

With so many toys portraying TV characters, there was less scope in the 1960s for innovators lacking such links. Even so, a new wave of dolls arrived. Barbie, who had been developed in America by Mattel actually made her debut there in 1959. Introduced as a teenage fashion model, she was far more curvaceous than previous dolls – and had her own boyfriend, Ken.

Girls could now play with a doll who embodied and inspired their fantasies of teenage and adult life. Barbie arrived in Britain in the early 60s and was joined in 1963 by Sindy, made by Pedigree.

Action Man was another product from America, where he was launched under the name GI Joe by Hasbro in 1964. The backlash against the Vietnam War at the end of the decade led to that character being discontinued.

Action Man arrived in Britain in 1966, manufactured under license by Palitoy, who also produced a sailor and an aircraft pilot. For many years he was the favourite toy for boys. In 1968 he was given hands that could grip, and in 1970 he acquired fibre hair. In 1984 the line was discontinued but he made a comeback in a new form in 1992.

Toys in the Seventies 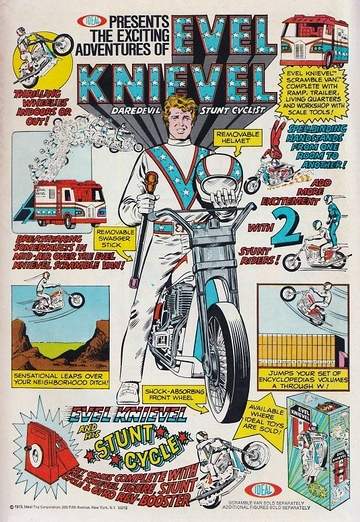 The success of vinyl plastics developed during the 1950s had enabled dolls such as Barbie, Sindy and Action Man to be made cheaply yet with realistic features. Along with other Action Figures such as the Six Million Dollar Man, they became favourite gifts for children.

The annoying sound of 1971 was that of people trying to master the art of Klackers. They caused numerous injuries and were eventually banned from schools.

The power of the TV commercial prior to Christmas put pressure on parents’ purses.

Peer pressure also fed the need to have the latest bike, the Chopper, or the skateboard with the go-fast stripes to give any child the necessary street cred. In 1977, over one million skateboards were sold in the UK.

Toys in the Eighties

The springboard for many toys was television or film, or occasionally a book such as Raymond Briggs’ The Snowman. Transforming robots were a craze from 1984, led by Hasbro. The film Transformers came out in 1986, boosting sales of items such as Galvatron, evil leader of the Decepticons.

Perennial games such as Monopoly, Scrabble and Cluedo were still favourites to be joined by Trivial Pursuit, the new quiz game from Canada that was aimed at adults. Toy cars, trains and slot car tracks like Scalextric remained popular too, while stunt kites became more and more elaborate.

Advances in computer technology enabled games programs to be played on hand-held consoles such as the Atari and Nintendo’s Game Boy introduced in 1983.

Not all toys in the sixties and seventies were manufactured and sold by the companies named above. In fact, some were totally free; Conkers, Go-Karts (“soap-boxes” in the US) made from old pram wheels and a few planks, and cardboard boxes for sliding down grassy hills . . .

When, on the day before her 22nd birthday in April 1969, Irish psychology student Bernadette Devlin became the youngest woman ever elected (for the Northern Ireland constituency of Mid-Ulster) into the British House of Commons,...

If there was ever a television series that demanded a toy line for its merchandise, it was The Six Million Dollar Man. This classic series chronicling the adventures of a half-man, half-cyborg bionic government agent named...

"Mattel’s Man in Space!" Space exploration was the dream of many a young mind in the late 1960s, and Major Matt Mason helped bring some of those fantasies to life (or at least to make-believe life)...

In a 1950s West German tabloid comic strip, there lived a buxom blonde character named 'Lili'. She was very popular in two dimensions, so it figured that three dimensions - especially given those hip/waist/chest measurements -...

Inspired by the Alien films and countless other sci-fi suspense flicks, this game sent a group of unlucky scientists and soldiers into a series of bases, each one overrun by slime-spewing, flesh-eating aliens. The game had...