Home Television Comedy On The Buses

Within six months of its launch, London Weekend Television was the grateful recipient of a new sitcom from seasoned writers, Ronald Wolfe and Ronald Chesney (who had been responsible for The Rag Trade).

The cheerfully lowbrow workplace sitcom which debuted on Friday 28 February 1969 had been rejected by the BBC and was set in the (fictitious) Home Counties-based Luxton and District Traction Company, ruled over by the petty-minded Hitler-esque Inspector Blake (Stephen Lewis).

“Blakey” was the constant tormentor of Stan Butler (Reg Varney) – the Driver of the green number 11 bus to the cemetery gates – and his conductor, faithful sidekick and partner in crime, Jack Harper (Bob Grant).

Most episodes centred on Stan and Jack’s battles with the dim-witted Blakey, who would usually retort “I ‘ate you Butler”, and/or the lads’ attempt to woo the conductresses (or “clippies”). Stan was a bachelor and lived with his bingo-loving, widowed, super-smothering mum (Doris Hare).

Also in the house were his plain sister Olive (Anna Karen – a former stripper) – who looked like she had fought a life-long battle against beauty treatment – and his brother-in-law, Arthur (Michael Robbins) who spent all of his time reading the paper and avoiding having sex with Olive.

Arthur originally worked as a hospital porter in the city hospital but changed job and worked as a booking clerk for British Rail. 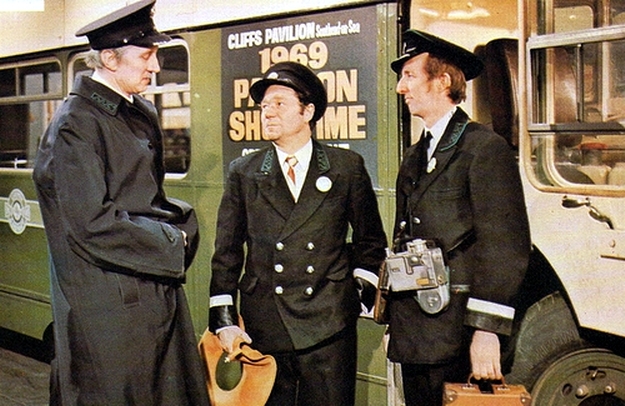 On The Buses was primarily a vehicle (no pun intended) for Reg Varney, aged 47 when the series began, and previously best known for his role in The Rag Trade. Here he drew upon his working-class background to portray the wily bus driver.

Varney failed to see the series out, leaving after seven episodes of the final 13. Reputedly Stan went to the Midlands to work in a bus-making factory.

At this point, Blakey moved into the Butler household as a lodger and was promoted from bit-part player to the show’s primary character.

In the final season, Arthur divorced Olive and left the show. In reality, Michael Robbins wanted to get back into theatre work again, hence his departure from the show.

When the show finally came to an end in 1973, Blakey’s character was spun-off into yet another new Wolfe and Chesney sitcom, Don’t Drink The Water, while plain Olive’s character, once again played by (the actually far from plain) Anna Karen, resurfaced in the writers’ 1977 – 78 LWT revival of The Rag Trade.

Yes, On The Buses was vulgar; yes, it scored easy, cheap and cheerful laughs; Yes, all the characters shouted their lines instead of talking them; yes, Stan said “Cor Blimey” at least a dozen times in every episode; and yes, of course, the critics dislike it – but the viewers absolutely loved it!

The huge popularity of the series can be gauged from the fact that the first of these movies was the top British box-office film in 1971, surpassing even the James Bond movie, Diamonds Are Forever.

The format of On The Buses was sold to American television, where it was remade by NBC as Lotsa Luck, running for 24 episodes in 1973 – 1974.

This series starred Dom DeLuise as Stan Belmont, a lost property clerk for the New York bus department, living at home with mum (Kathleen Freeman), sister Olive (Beverly Sanders) and her good-for-nothing Arthur (Wynn Irwin). The show was not a success and has never been screened in Britain.

Another fizzer was an early 1990s plan to revive the Stan Butler character for another series, with Reg Varney reprising his role but in an elevated position – that of a businessman operating his own fleet of buses in the newly deregulated market.

TRIVIA
The exterior shots for On The Buses were filmed at a bus depot in Wood Green, London. A genuine green Bristol Lodekka bus (registration number AEV 811F) was used in the studio.

Hired from the Eastern National Bus Company, this vehicle, on its arrival, created something of a problem. Each week a live studio audience watched the series recorded and during some of the scenes, Reg Varney had to actually start the engine.

“In the confined studio space, we suddenly realised that if we weren’t careful we would gas the audience,” said Reg. So the ingenious technicians at London Weekend Television devised a way of boxing in the bus exhaust and piping the fumes straight out of the studio and away from the audience. On 8 November 2003, Bob Grant was found dead in his garage in a fume-filled car with a hose attached to the exhaust pipe. He was 71 years old.

Where The Heart Is