She is now an architect and he is the General Manager of a public TV station called WKS-TV.

While they cling to their idealistic views from their hippie days, their academically brilliant eldest son Alex is the ultra hardcore conservative. He loves Richard Nixon and wears a tie at all times.

Their 15-year-old daughter Mallory is a tad ‘intellectually challenged’ and is more interested in clothes and boys than any academic pursuits. 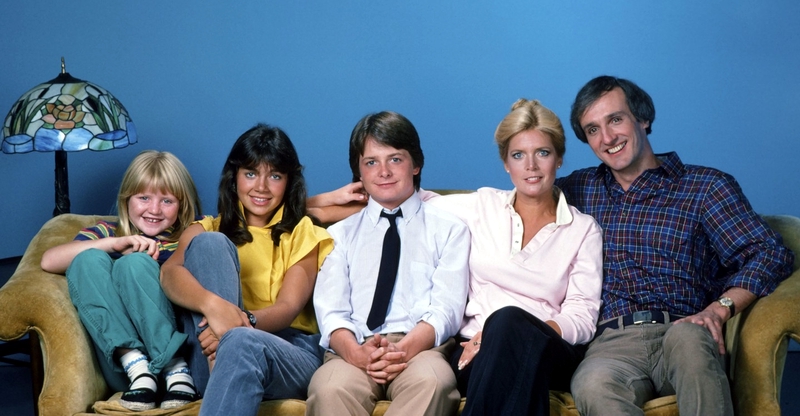 Nine-year-old Jennifer just wants to be a kid, and next door neighbour, Skippy, is Alex’s best friend who has a crush on Mallory and is a little dense.

During the 1984-1985 season, Elyse gives birth to a baby called Andy. The series then follows Alex to Leland College where he finds love with another student, Ellen Reed (Tracy Pollan who became the real-life Mrs Michael J Fox).

Back at home, Mallory is dating an illiterate aspiring sculptor called Nick Moore. Mallory barely graduates from high school and embarks on a career in fashion design.

Ellen, it was said, went to Paris – and a new entanglement was introduced for Alex, psychology student Lauren Miller, who encourages him to take part in a study of over-achievers, attend therapy sessions and reach inside to expose his repressed inner self.

The part of Lauren was a very early career highlight for future Friends superstar, Courteney Cox (pictured below).

In the last episode, the nuclear family is finally, and inevitably dissolved, as Alex graduates and takes a $75,000 a year job as an investment banker in New York with a large Wall Street firm.

Besides its continuing parody of Reagan-era values, Family Ties tackled some sensitive subjects in unusual episodes. Perhaps the most famous episode was ‘My Name Is Alex’, performed theatre-style on a nearly bare stage, in which Alex worked through his grief and disorientation following the sudden death of a young friend in a car accident.

During the 1988-1989 season, the Keaton’s confronted racism when a black family moved into the neighbourhood and faced their own greatest crisis when Steve suffered a heart attack and had to undergo bypass surgery.

The biggest problem faced by the Family Ties team was in ensuring that the radical and often rude Alex won over rather than alienated the viewers. Gary David Goldberg overcame this by maintaining an open-door policy on the set (which, of course, fitted perfectly with his ideals), embracing suggestions from the entire production crew.

It was also customary for Alex to win his way through most of an episode but be defeated or deflated by show’s end, and be depicted as someone who undoubtedly cherished his family, even if he did have an odd way of showing it.

Though the show hit some bumps in its first couple of seasons, Family Ties hit its stride once the producers realised Fox was their real star, and the five-foot-four-inch unknown Canadian actor became a household name.

Fox wasn’t originally supposed to even play the role of Alex – Matthew Broderick was, but he decided he didn’t want to be weighed down with series work.

US President Ronald Reagan stated publicly that Family Ties was his favourite show. That’s the eighties for you!

1 9 7 6 (UK) Southern Television's Get This! was hosted by Harry Fowler (ex-The Army Game) and singer Kenny Lynch and presented incredible stories for children...