Nobody expected Gilligan’s Island to survive its first few weeks. Not the cast. Not the network. Certainly not the critics, who thought the entire concept for the show was dumb. But America made the show a hit.

The famous theme song to the show – The Ballad of Gilligan’s Island (by George Wyle and Sherwood Schwartz) – tells the tale of seven people setting out on an ill-fated ‘three-hour tour’ from Honolulu aboard a small charter boat called the SS Minnow.

The passengers and crew wind up shipwrecked on an uncharted island in the Pacific Ocean.

The castaways were all broad caricatures; A millionaire and his daffy wife, an all-American Midwestern girl next door, a glamorous movie star, a brainy scientist, and the Laurel and Hardy team who got them all there in the first place – The Skipper, and his simple-minded mate, Gilligan.

For three years the plot hardly ever varied: The castaways would usually hear something important on their transistor radio, often while the Howell’s sat in their makeshift lounge chairs sipping exotic Polynesian cocktails while Gilligan waits on them.

Ginger, Mary Ann and the Howell’s would go through numerous wardrobe changes – although the skipper, the professor and Gilligan wore the same clothes constantly for three years.

Despite the fact that the castaways were only on a three-hour tour they have access to a near-endless wardrobe including items like military outfits and nurses uniforms.

Meanwhile, the professor would work on some miraculous device to either get them off the island or make life easier for them – a bicycle-powered washing machine, a hand-powered phonograph, and a cure for Gilligan’s rare upside-down vision disorder (made from the juice of the kepta bora berry). 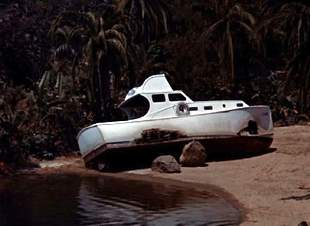 Gilligan’s Island was eventually cancelled because CBS executives wanted to revive the sagging ratings of Gunsmoke by attracting a younger audience. Gunsmoke was moved into the timeslot and it immediately jumped back into the Top 10, where it stayed for six years.

Technically speaking, the final episode of the lovably stupid sitcom, which aired on 17 April 1967, didn’t wrap anything up.

In a typical Island set-up, a native king came calling, searching for a maiden to be sacrificed to his tribe’s volcano god. The ever-heroic Gilligan, seeking to save Ginger, Mary Ann and Mrs Howell from that fate, dolled himself up to distract the king.

The castaways did finally get off the island but inexplicably then went on a reunion cruise onboard the Minnow II, only to wind up stranded back on the same island as the result of another freak storm. 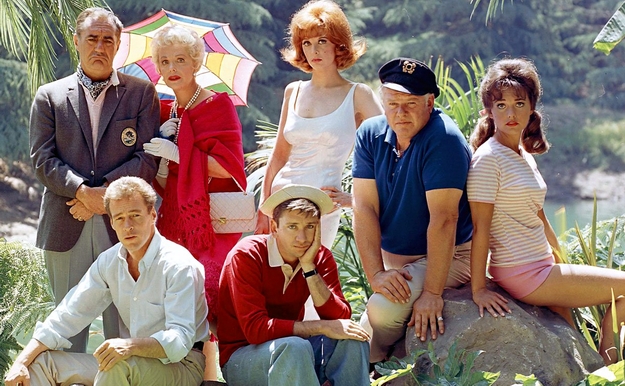 In 1978, NBC decided to bring back the original cast for a reunion special – Rescue From Gilligan’s Island. All agreed to appear except Tina Louise (who wanted too much money). She was replaced by Judith Baldwin.

The two-part show aired in October as a two-part special and was a phenomenal hit.

A follow-up special called Castaways on Gilligan’s Island was screened in 1979, in which the group converted the island into a tourist resort. 1981 brought yet another “sequel” in which the Harlem Globetrotters dropped by.

There was a talk of reviving the series, but audiences for the 1979 and 1981 sequels were not very large, and the plans never materialised. 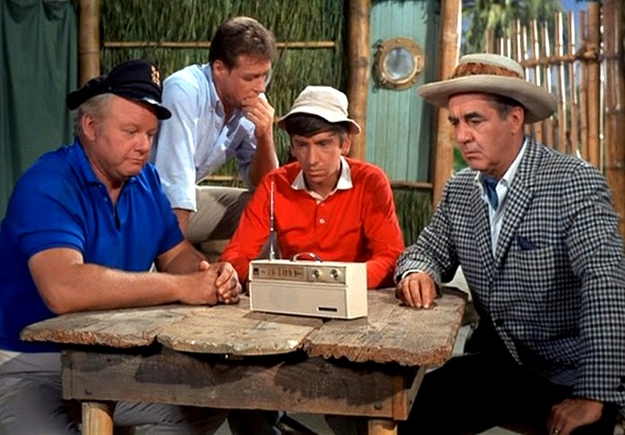 TRIVIA
The island you see in the distance at the beginning of the second and third season is an actual island called Coconut Island (or Mokuoloe). It is located in Oahu’s Kaneohe Bay in Hawaii and is the home of the Institute of Marine Biology.

The actual “island” in the series was man-made and located in the middle of an artificial lake at CBS’ Studio Centre in Hollywood. It cost $75,000 to build and was surrounded by painted landscapes, artificial palm trees and wind machines.

Bob Denver stirred up tensions with Tina Louise when, in his 1993 memoir, he said he once heard her having noisy sex in her dressing room.

THE BALLAD OF GILLIGAN’S ISLAND

Just sit right back and you’ll hear a tale
A tale of a fateful trip
That started from this tropic port
Aboard this tiny ship.

The weather started getting rough
The tiny ship was tossed,
If not for the courage of the fearless crew
The Minnow would be lost

The ship set ground on the shore of this
Uncharted desert isle
With Gilligan, The Skipper too
The millionaire and his wife
The movie star, and the rest (The professor and Mary Ann)
Here on Gilligan’s Isle

In the 1970s, TV Producers turned from the excess of violence seen in drama series' of the 60s, to seek other ways of stimulating...

1 9 5 2 - 1 9 5 4 (UK) Following on the success of London Town, Richard Dimbleby presented About Britain - a similar series presenting "journeys to people...