This was English seaside humour at its most traditional. Once nicknamed “Are You being Stereotyped?” the series was a cross between mucky postcards and music hall cheekiness, with some 1970s “poof” and “pussy” jokes thrown in a la Benny Hill for good measure.

The doors of Grace Brothers department store first opened in 1973 as part of the BBC’s Comedy Playhouse, launching the staff of Ladies and Gentleman’s Ready to Wear on the British public. The atmosphere was quaint and old-fashioned. John Inman camped it up as tape measure-brandishing men’s sales assistant Mr Humphries – always ready to mince over and take an inside leg measurement. Although Mr Humphries was never explicitly called a homosexual in the show, the innuendo was loud and clear.

Gay rights groups initially reacted with outrage to Inman’s character but his “I’m free” catchphrase was being repeated across the country within weeks of the first shows – and the character became a gay icon. 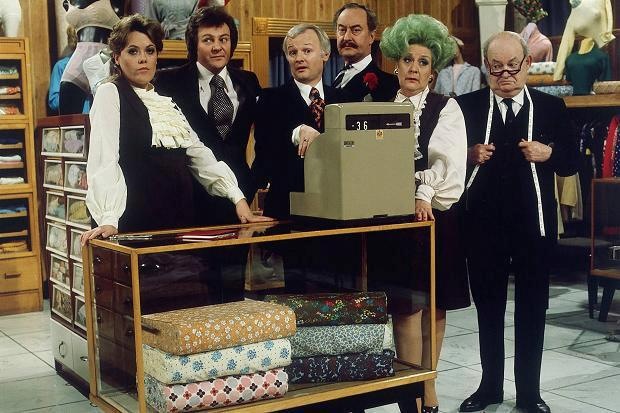 The blowsy, overbearing Mrs Slocombe was an all-year-round pantomime dame with piled-up mauve (or pink or blue or green) hair and an unseen, much-fussed-about cat.

Her pussy (nudge-nudge, wink-wink) had originally existed but suffered stage-fright and was sacked. 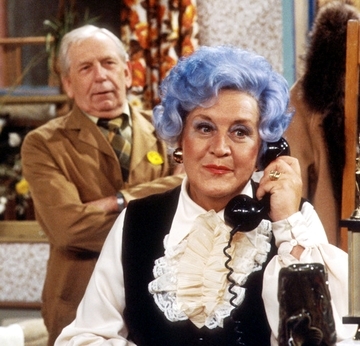 Overseeing the whole operation and telling everyone that they had “all done very well” was the store’s owner, doddery Young Mr Grace (Harold Bennett), a failing geriatric with a dolly bird on each arm.

Mr Harman (Arthur English) was the cantankerous caretaker who took over from the militant unionist Mr Mash (Larry Martyn).

A film version of Are You Being Served? was released in 1977 with more of the same old formula.

James Hayter joined the regular cast in 1978 as Mr Tebbs, who had just been appointed head of the gentleman’s department after serving Grace Brothers faithfully for over 17 years in other parts of the store.

In 1992 the main cast of the show was reunited in a spin-off, Grace and Favour, set in a country mansion hotel (Millstone Manor) which they inherited from Young Mr Grace. Unfortunately, he had bought the house with their pension fund . . .

In 1979, CBS attempted an American version of the show called Beanes Of Boston. Despite being written by AYBS? writers Jeremy Lloyd and David Croft, the attempt was unsuccessful and only one 30 minute episode aired.