Tough guys with fast motors, big guns and . . . frizzy perms? They were cool, they were handsome and they drove a Capri. 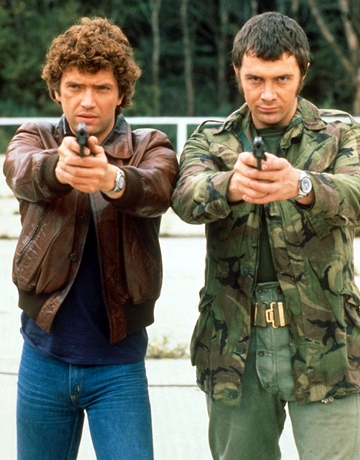 CI5 (the CI stood for Criminal Intelligence) seemed to be all about shooting, car chases and a whopping big explosion at the end of each episode – all served with a light sprinkling of sexual innuendo.

Welcome to The Professionals, staple of ITV Sunday nights in the late 70’s and early 80’s.

In February 1977 The Avengers‘ supremo Brian Clemens and executive producer Albert Fennell were asked by London Weekend Television to create a rival to The Sweeney over on Thames Television.

All episodes began with a three-minute pre-credit sequence which often had little to do with the storyline. The plots in the 57 episodes varied from the sublime to the bizarre.

One of the stranger gems was ‘Discovered In A Graveyard’ in which a wounded Doyle can’t decide whether to live or die – all told via a dream while in a comatose state.

One storyline involved the Ku Klux Klan, but Collins was uneasy about his character’s racist tendencies and the episode was never shown in the UK. 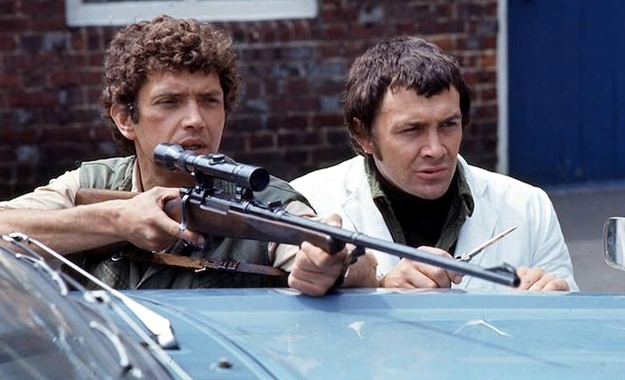 Clemens once claimed he could teach someone to do a hand-brake turn in one of the trademark Capri’s within ten minutes. The tell-tale tyre marks left on roads during filming tell a different story.

Watch out too for now-famous actors making cameo appearances (including TV debutant Pierce Brosnan), the dubbing of foreign accents on to English actors during the crudely filmed first series, and continuity errors in many episodes. 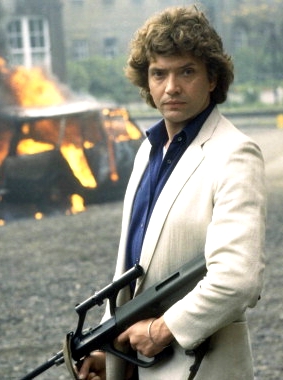 Each hour-long episode – filmed almost entirely on location around Wembley – cost as much as £115,000 but viewers, especially men, thought it was worth every penny.

Lewis Collins broke his ankle while parachute jumping in his spare time and halted production for four months. Meanwhile Martin Shaw was having self-esteem problems. The thoughtful, vegetarian, non-drinking actor wanted to leave after the first year of his four-year contract, saying he hated being a ‘personality’.

He was contractually bound to stay but later described the series as ‘a prison’, calling Ray Doyle a ‘violent puppet’. He loathed his famous permed curls too – “That awful haircut. Lewis used to call me the Bionic Golly,” he said.

The fourth and fifth series had to include more and more spectacular stunts to fend off the growing competition from Minder, Hart to Hart and even LWT’s The Gentle Touch. Bodie and Doyle were seen hanging from the landing gear of a helicopter in flight, piloting a hovercraft down the Thames and abseiling down office blocks.

Rather less attention was paid to devising half-sensible plots, and by now both actors were bemoaning the fact that they had no say in the stories. Gordon Jackson scoffed at them, but Lewis said he was ashamed to watch some episodes.

The show was discontinued in 1981 (although the last episode wasn’t shown until 1983 because of a backlog) when Collins and Shaw chose not to renew their contracts. The ending was an explosive crash between an inflatable dinghy carrying Bodie and Doyle and the launch they were chasing. There were several repeat runs and the shows were sold widely overseas. 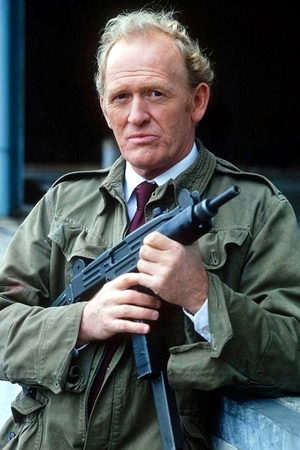 Martin’s reason for refusing permission was his belief that the Doyle role had led to his losing film roles.

A retread, The New Professionals, with Edward Woodward in the Jackson role, was a slur on the original’s memory, despite having original creator Clemens on board.

TRIVIA
It seems incredible now but posh-voiced Anthony Andrews was originally signed to play Bodie, with Jon Finch as Doyle. Finch decided he couldn’t play Doyle as an ex-cop so to avoid any re-writing the producers went back to auditioning every tough man in town.

One they liked was Martin Shaw, so they hired him – but then came a snag. In a screen test he looked remarkably similar to Anthony Andrews. The producers remembered Lewis Collins, who had worked with Martin in an episode of The Avengers.

They were delighted to find that Lewis was available, so it was out with Anthony Andrews who had to make do with starring in Danger UXB and becoming an international star with Brideshead Revisited. 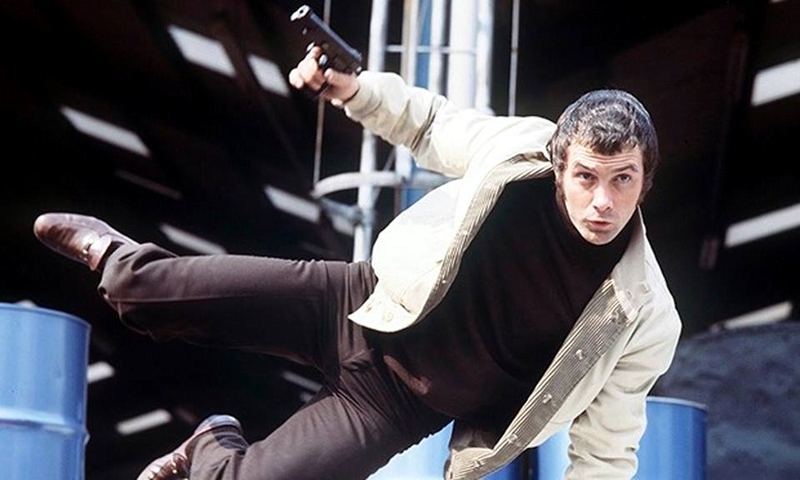