Few shows are remembered as fondly as The Banana Splits.

Combining live action, costumed hijinks, classical animation, and rock music with pre-teen psychedelic imagery at a break-neck pace, this show spoke to a new generation of TV babies, and they listened . . .

The Banana Splits themselves were an ersatz rock band made up of a dog (Fleegle), a lion (Drooper), a gorilla (Bingo), and a baby elephant (Snorky).

Their songs were Tin Pan Alley’s Fab Four retreads. The classic I Enjoy Being A Boy included the I Am A Walrus-style verse “I live in a purple plum mansion/In the midst of a strawberry stream/And mellifluous bells ring out softly/from a hill of vanilla fudge cream”. (!)

William Hanna and Joseph Barbera hired some of the best voices in the business: Paul Winchell (aka Dick Dastardly) supplied Fleegle’s drawl, while Daws Butler (Yogi Bear, Huckleberry Hound) was the voice of Bingo. Snorky only ever honked but was officially voiced by Don Messick (something Messick has since denied). The show itself resembled the prime-time comedy hit Rowan and Martin’s Laugh-In with its frenetic pacing, psychedelic graphics, and short comedy blackout sketches, mixed in with longer episodic features.

The phrase “Hold the bus” was the sign for the Splits to behave as if they had been driven mad by a mailbox which wouldn’t give Fleegle the mail, a bin which wouldn’t accept Drooper’s trash, and the odious Sour Grape girls.

For many, the most memorable feature segment was Danger Island.

A live-action segment filmed on location, it featured the shipwrecked Professor Irwin Hayden (Frank Aletter) and his crew as they outran dangerous natives, killer animals, and murderous pirates, and was famous for the cry of “Oh oh Chongo”. The action-packed show featured a young man named Michael Vincent, who would come to be known as teen idol Jan-Michael Vincent, and many of the episodes were directed by Richard Donner, who would later helm the Lethal Weapon saga.

Another segment was The Three Musketeers, which was based on the classic novel, with Porthos, Aramis, Athos, and young D’Artagnan duelling through various adventures in the service of their Queen.

A new character, Tooly, was added to serve as a link between children and The Musketeers, showing how exciting their adventures could be.

And let’s not forget the Arabian Knights. Led by Prince Turhan and Princess Nida, this odd group of heroes did battle with the evil Bakaar to try to recapture Turhan’s throne. Bez, Fariik, and Raseem were the three magicians who assisted the royal duo through an array of magical spells. Along for comic relief and a well-placed mule kick was Sazoom the donkey.

Old episodes of The Hillbilly Bears, a component of The Atom Ant/Secret Squirrel Show, were thrown in for a dose of comedy.

Spawning a myriad of toys and games, The Banana Splits Adventure Hour was a landmark moment in children’s TV; the show was a herald of the new youth culture that was poised to invade the living room and helped shape an entire generation.

Fleegle, Drooper, Bingo and Snorky were all instantly recognisable characters. Unfortunately, anyone could wear those furry outfits – A painful truth soon discovered by Dan Owen, Terence Henry, Jeffrey Brock and Jay Larremore (the guys in the suits on the show). 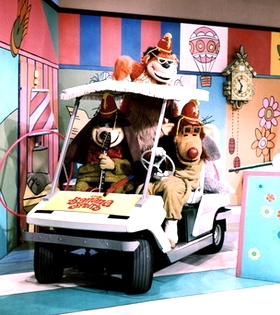 When the Splits staged their very own national US concert tour, local actors were hired to save fees and expenses.

One banana, two banana, three banana, four
Four bananas make a bunch and so do many more.
Over hill and highway the banana buggies go
Coming on to bring you the Banana Splits show

Four banana, three banana, two banana, one
All bananas playing in the bright warm sun
Flipping like a pancake, popping like a cork,
Fleegle, Bingo, Drooper and Snork

Two Banana, four banana, one banana, three
Swinging like a bunch of monkeys hanging from a tree
Hey there everybody won’t you come along and see
How much like Banana Splits everyone can be

End of Part One