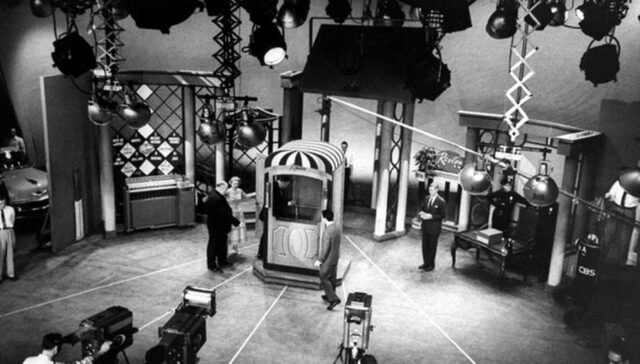 Before the quiz show scandal of the late 1950s, The $64,000 Question was a high-stakes, nail-biting, ratings-topping game show phenomenon.

Sponsored by the Revlon lipstick company it was the first of TV’s big-money prime time game shows, and some of its biggest and most illustrious winners included a housewife, an eleven-year-old whiz kid, a jockey, a shoemaker, a cop, an actress, and a shrink named Dr Joyce Brothers (pictured below right) who would go on to dole out good, sound advice to the masses.

The CBS show was really a hyped-up, bright-lights version of radio’s The $64 Question. Contestants professed expertise in particular categories (Dr Joyce’s was boxing, by the way), and each time they answered questions in their chosen fields correctly, their money doubled.

The more questions they answered, the more money they could potentially win, but the questions got tougher at each level – though players who made it all the way to the $64,000 question could bring an expert along with them for help. 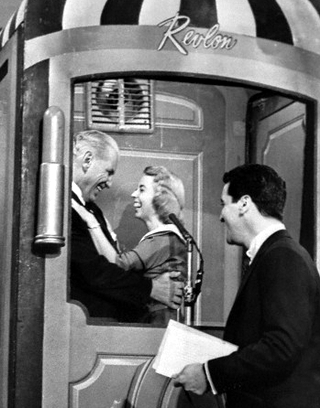 For questions in the upper echelons of the game, players were politely escorted into the stage’s ”Revlon Isolation Booths” by pretty assistants, perhaps made all the prettier by the sponsor’s cosmetic wares.

Inside the isolation booths, contestants couldn’t hear the nervous audience’s gasps and whispered speculation about the answers – which helped maintain the players’ furrowed brows and squinty looks of pained concentration that the camera loved to pick up.

And if they indeed answered correctly, they came back to the show the following week to answer a question at the next highest level.

The “one question per contestant per show” format meant that on any given episode, there were camera-savvy vets who were going for the big money and wet-behind-the-ears newbies who were just starting out at the lowest levels.

And we’re talking low – the game began with stakes of just one dollar (in one episode, Jack Benny made a gag appearance, bowing out after he won that first dollar).

Shiny new Cadillac’s were the consolation prize for players who lost at the eight grand level, and for those poor $64,000 losers, there was a four thousand dollar prize to take the sting out of coming just oh-so-close, but not close enough.

In its first year, the show rocketed past I Love Lucy to become a national pastime. Over the next seasons, if and when the ratings started to dip, producers took the cap off the prize money possibilities so that contestants could win more than the usual $64,000. And the greatest players could always play on the show’s even bigger money companion, called The $64,000 Challenge.

The aforementioned eleven-year-old whiz kid appeared on both, incidentally, and hoarded 192 thousand big ones for his efforts.

The $64,000 Question set the precedent for shows like Challenge, Twenty-One, The Big Surprise and Dotto. But when evidence of game rigging on several programmes erupted into the quiz show scandal of 1958, most of the big money shows were taken off the air, whether any cheating was ever uncovered or not.

Though no malfeasance was associated with the beloved $64,000 Question, it went the way of the others.

Maid Marian and Her Merry Men