Although Andy Pandy was actually produced in the late fifties, it was repeated often up to 1980 as the mainstay of the Watch With Mother series.

Initially, it was shown in the afternoon between 3:45 pm and 4:00 pm at the end of the women’s programme For Women. But in the 1960s Watch with Mother was scheduled at lunch time.

With his very visible strings, blue and white striped all-in-one romper suit, ruffle collar and hat, Andy actually also started life as a solo performer. Some months later he was joined by his trusty playmate Teddy (and later by Looby Loo, a rag doll). Some months later he was joined by his trusty playmate Teddy (and later by Looby Loo, a rag doll).

Looby (in a spotted skirt and with yellow plaits) led a lonely existence and only came to life when Andy and Teddy were not around.

When Looby was alone she would dance and play – and also sweep and dust Andy’s house. Now there was a nice early sexist stereotype for young kiddies.

She even had her own catchy song – “Here we go Looby Loo”.

The stories were very simple. Sometimes Andy Pandy would swing on his swing:

“Children, you swing your arms backwards and forwards and pretend you’re on a swing just like Andy!”.

Sometimes Andy and Teddy would play on the see-saw or on a trampoline. Sometimes they would pretend to be engine drivers on a train:

“All engines can go backwards, but I don’t think the children watching ought to go backwards because they couldn’t see where they were going and they might bump into things!”

The 26 black and white prints of Andy Pandy were repeated some 34 times over 20 years and eventually became so poor that 13 new episodes were filmed in colour in 1970 at the famous Abbey Road studios. 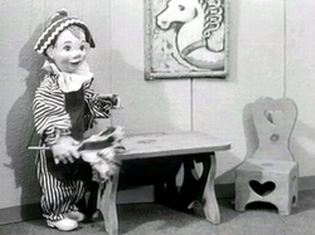 Andy Pandy was created by Freda Lingstrom, who was head of Children’s Television programmes at the BBC between 1951 and 1956, and her long-standing friend, Maria Bird, as a programme specifically directed at the pre-school audience.

Lingstrom had been responsible for radio’s Listen with Mother and was asked to make a television equivalent on music and movement lines.

An old man in Bird and Lingstrom’s village (Westerham, Kent) crafted the puppet – a toddler in a striped clown outfit – which they called Andy Pandy.

The programme became the cornerstone of the Watch With Mother strand which began in 1953. Made on film rather than broadcast live, surviving episodes are therefore now among the earliest relics of British television.

Andy Pandy had no linear narrative structure. Instead, it presented a series of tableaux with no apparent theme. For example, in one programme Andy starts by playing on a swing, accompanied by Valerie Cardnell singing Swinging high, Swinging low.

He is joined by Teddy and the camera then focuses on Teddy who enacts the movements to the nursery rhyme Round and Round The Garden.

Finally, after a scene with Andy and Teddy playing in their cart and a scene with Looby Loo singing her song, the two male characters return to their basket and wave goodbye and Maria Bird sings Time to go home.

Lingstrom argued that the tempo was slow and there was no story so that the action could move from one situation to another in a way totally acceptable to the very young child.

In March 2002 Andy, minus his strings, returned to entertain yet another generation of children worldwide, as a modern stop-motion series made by Cosgrove Hall.

Time to stop play, Just for today
Andy and Teddy must now go away
Andy is waving goodbye
Goodbye
Goodbye . . .