Wednesday’s Watch With Mother featured the twin pot-dwellers Bill and Ben. The adventures of this pair of strange, stringed puppet creatures living in flowerpots at the bottom of the garden first aired in December 1952.

Andy Pandy might have had Teddy and Looby Loo (who was never alive whenever anybody was around anyway) but The Flowerpot Men had Little Weed who stood between them and kept watch for the evil “man who worked in the garden”.

It was never satisfactorily explained why Bill and Ben lived in fear of this (unseen) man or why they clambered back into their pots so frantically to hide on his imminent approach.

The two puppet men had legs made out of upside-down flowerpots and oversized gloves and hobnail boots. Their torso was a flowerpot too. They spoke gibberish – The “flobbadob” language, which was invented by Peter Hawkins, who also supplied the voices for Bill and Ben and had worked on Captain Pugwash and later provided the ‘voices’ for The Daleks on Doctor Who.

As with Andy Pandy, the creative forces behind Bill and Ben were Freda Lingstrom – then head of Children’s Television programmes at the BBC – and her old friend Maria Bird, who together formed Westerham Arts.

Audrey Atterbury (who pulled the strings) and Peter Hawkins originally rehearsed the show on Freda’s garden wall at Chartwell near Westerham in Kent – because it was the right height for the puppets.

From 1955 to 1958 rehearsals and filming took place in a tin shed at the BBC Lime Grove Studio complex.

The producers of The Flowerpot Men were criticised by some parents for promoting immaturity (primarily due to the constant “flobbadobb-ing!). I personally found them scary when I was a wee nipper for the very same reason!

And now in glorious nostalgia-vision, an excerpt from an all-time classic piece of kiddies television:

“Once upon a time there was a little house. All around the house was a beautiful garden. And down at the bottom of the garden was a place where the man who worked in the garden left his things when he went into the house to have his dinner.

One day, when he’d gone into the house to have his dinner, he left behind an old glue pot, some seedboxes and some packets of seeds. There were other things lying about and flowerpots; Two little ones, two middle-sized ones and two great big ones. And just behind the big flowerpots was a little weed:

and there they all were lying quietly in the sunshine. The little weed looked all about her, and when she saw that everything was quiet she knocked gently on the two big flowerpots and said: 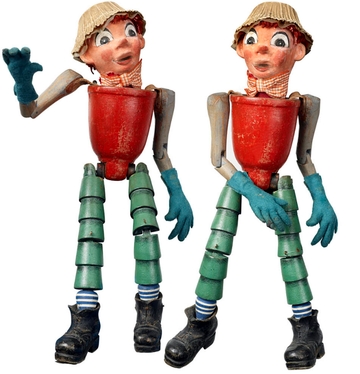 First out came their little faces, smiling all over, then their little hands with big garden gloves on; they both turned round and saw each other:

Then they said hello to the little weed in their flowerpot way of talking.

and the little weed laughed and said:

and the flowerpot men thought she meant that someone was coming so they popped down into their flowerpots again and all was quiet and drowsy in the sunshine and the little weed stayed in between the flowerpots and said nothing.

The Flowerpot Men made a TV comeback after a break of almost 30 years. The pair were given a makeover in a bid to compete with modern children’s favourites like The Teletubbies and The Tweenies.

The newly commissioned 26 part series, which also included Bill and Ben’s floral pal Little Weed, was made by Cosgrove Hall and shown in 2001 in the UK on the BBC.

Although the two characters kept their “flobbalobbalob” language, a narrator (comic actor John Thomson) now translated their gibberish so viewers could understand them.

Bill and Ben were given larger faces and now wore lime green bow ties with green gloves. There were no strings attached to the pair, as the characters were created using computer animation. Little Weed also changed her image – sporting sunglasses and taking on a role as “earth mother”.

Known in the past only for her trademark “weeeeeeeed” catchphrase, she now had a more expanded vocabulary. A host of new characters joined the series, including a hedgehog and a worm.