With a dark sense of humour, Maverick spoofed itself and other Westerns (winning an Emmy award for Best Western Series in 1959). Bret Maverick (the then relatively unknown James Garner) and his brother Bart were much better at cards than gun-slinging, and their life was a constant pursuit of money and the easy life.

The Maverick brothers were not heroes in the traditional Western sense. They were devious, cowardly card-sharps who exploited easy situations and quickly vanished when faced with potentially violent ones, moving from one daft-sounding town (Oblivion) to another (Bent Fork). 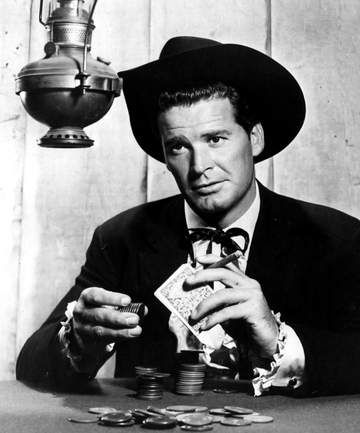 A popular part of their repertoire for evading difficult moments were the “Pappyisms” that corrupted their speech. Quoting their old Pappy and mentor they were likely to come out with sayings like “My old Pappy used to say ‘If you can’t fight ’em, and they won’t let you join ’em, best get out of the county'”.

In addition to his words of wisdom, Pappy also left each of his boys a $1000 bill for security against bad times which they tucked inside their travelling clothes.

Starting out as a straight Western drama (for the first three episodes), the series soon developed a comedy streak after writer Marion Hargrove decided to liven up his scriptwriting work by inserting the simple stage direction: “Maverick looks at him with his beady little eyes.”

Other scriptwriters then followed suit and Maverick took a unique turn away from the more formal and traditional Warner Brothers Westerns then on the air (Lawman, Colt .45, Cheyenne and Sugarfoot).

The series was created by producer Roy Huggins and developed out of a story in which he tried to see how many TV Western rules he could break and get away with; the script was filmed as an episode of Cheyenne (the episode was called ‘The Dark Rider’) and featured guest-star Diane Brewster as a swindler and cheat – a role she was later to play in Maverick as a recurring character, gambler Samantha Crawford.

Among the more amusing episodes, ‘Hadley’s Hunters’ (in the fourth season) saw Bart enlist the help of Ty Hardin (Bronco), Will Hutchins (Sugarfoot), Clint Walker (Cheyenne), John Russell and Peter Brown (Lawman) all playing their respective characters from the WB stable of Western TV series (with Edd “Kookie” Byrnes from 77 Sunset Strip as a blacksmith).

In the fifth season, an episode entitled ‘Three Queens Full’ was a wicked parody of Bonanza in which the Subrosa Ranch was run by Joe Wheelwright and his three sons, Moose, Henry and Small Paul . . .

Actor James Garner and his Warner Brothers studio bosses clashed when Garner took out a lawsuit against the studio for breach of contract arising out of his suspension during the 1960 writers’ strike. Warners claimed that it was justified in suspending Garner due to the writers’ strike. It was no secret at the time that Garner had wanted to be released from his contract, and in December 1960 the judge decided in favour of Garner.

During the course of the testimony, it was revealed that during the strike Warners had illegally obtained around 100 TV scripts, and had as many as 14 writers working under the pseudonym of “W. Hermanos” (Spanish for “brothers”).

As a replacement for Garner in the fourth season of the original series, Warners brought on board Roger Moore, as cousin Beauregard, a Texas expatriate who had lived in England. 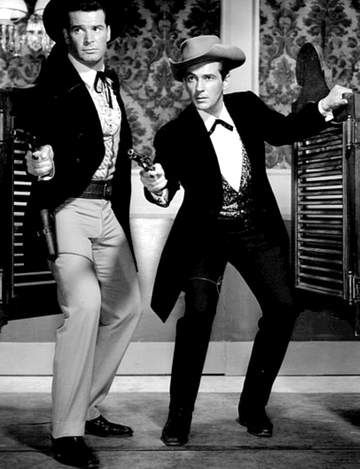 When Moore departed after just one season another Maverick brother, Robert Colbert’s Brent Maverick, a slight Garner/Bret look-alike, was introduced in the spring of 1961 to alternate adventures with Bart.

Colbert stayed only until the end of that season, leaving the final (and longest remaining) Maverick, Jack Kelly, to ride out the last Maverick season (1961-62) alone.

The series came to an end after 124 episodes. Garner moved on to a successful film career but returned to series television in the 1970s with The Rockford Files (1974-79).

He appeared as a guest star along with Jack Kelly in the 1978 TV movie/pilot The New Maverick, which produced the short-lived Young Maverick (1979-80) series, minus Garner; he also starred in the title role of Bret Maverick (1981-82) which he co-produced with Warners.

A movie version of Maverick was released in 1994 with Mel Gibson starring as Bret Maverick. James Garner appeared in a cameo as Bret’s father.