The Real McCoys was a family show with a twist. This sitcom family was unlike the usual TV family: porch-rockin’, gol-darnin’ Amos McCoy (Walter Brennan) was a widower who headed the clan of his grandson Luke (Richard Crenna) and his wife, Kate (Kathleen Nolan) who in turn were raising younger siblings not their own – Luke’s teenage sister, ‘Aunt’ Hassie (Lydia Reed) and Luke’s 11-year-old brother, Little Luke (Michael Winkelman). 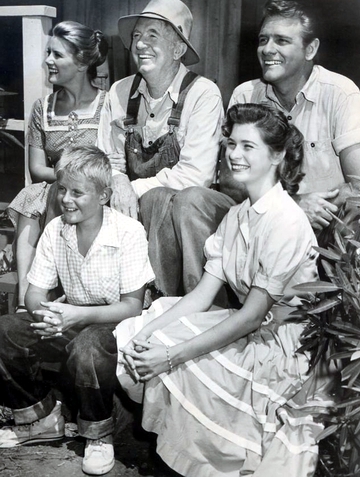 The happy-go-lucky West Virginia mountain family picked up stakes and moved to a ranch in California’s San Fernando Valley.

Completing the regular cast were Pepino (Tony Martinez)  – “Si, senor Grandpa!” -, the musically inclined farmhand, and George MacMichael (Andy Clyde, who had been a featured comedian with the Mack Sennett studio in silent film days and was paired with WC Fields in several motion pictures of the 1920s), their argumentative neighbour.

George’s spinster sister Flora (Madge Blake) had eyes for Grandpa, but she never did snare him.

In 1962, when the series moved to CBS, Luke became a widower and many of the plots began to revolve around Grandpa’s attempts to match him up with a new wife. The series ended its run in 1963.

The Real McCoys also began a new category of sitcoms: creator and producer Paul Henning was to specialise in rural-oriented series about transplanted lifestyles.

Later successes in his stable of shows included The Beverly Hillbillies, Petticoat Junction and Green Acres. 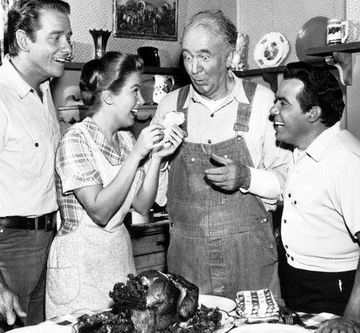 Days of Vengeance, The