Son of Fred (September 1956) grew out of the five-part A Show Called Fred (May 1956) which in turn was a revival of sorts of The Idiot Weekly, Price 2d.

All three programmes featured the same cast and, despite an evident Goon Show influence (The Ying Tong Song is used over the main titles and harmonica player Max Geldray performs in musical interludes), the two series leaned more to being star vehicles for Peter Sellers, with Spike Milligan taking a supporting role. While Sellers enjoyed sole above-the-title billing, Milligan, with his scriptwriting credit, appeared below the title. 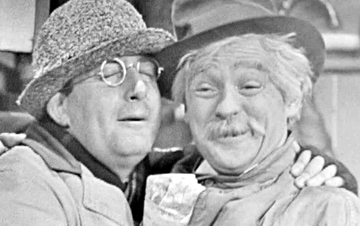 Milligan was bored with conventional TV boundaries and began to experiment with surreal concepts using minimal scenery, simple props and the use of animation to link between sketches.

Whether running the end of one sketch into the beginning of another, employing inappropriate back projection, or focusing attention onto the artifice of television production itself by placing camera crews or other personnel in the shot, Milligan gave the shows an appearance of chaotic anarchy that made little sense – which was the point.

Fred ended with an extended parody of the various po-faced dramas with which it shared the schedules. Soap opera The Grove Family became The Lime Grove Family: “Mum” cooked roast peacocks’ tongues on baked mangoes in the piano, whereupon’son’ hit her with a club and was reprimanded by ‘Dad’, saying, “You mustn’t hit your mother like that. You must hit her like this“.

Their version of The Count of Monte Cristo featured the first appearance of the famous coconut-halves-for-horses’-hooves sight gag and ended with the destruction of the already threadbare set, a rousing chorus of Riding Along On the Crest of a Wave, and Valentine Dyall doing the washing up in the studio’s self-service canteen. 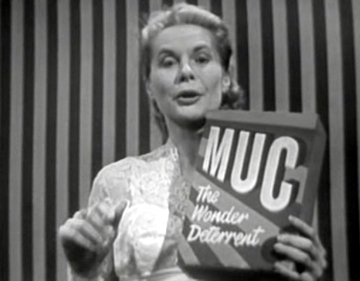 There would be mock interviews with insane individuals, often called ‘Hugh Jampton’, commercials for MUC “the wonder deterrent” (pictured at right) and viewer query slot Idiots Postbag, presented in front of a projected backdrop of the open sea or a burning building – “Dear sir, do you know what horse won the Derby in 1936?” “Yes, Mr Smith, I do”.

Director Dick Lester kept the live studio work commendably on track, sometimes even cutting sketches short when the shows were in danger of overrunning their slots.

However, it was the filmed inserts (mostly shot in the countryside) that he particularly enjoyed directing, leading to his Oscar-nominated short film The Running, Jumping and Standing Still Film (1960), with its series of Fred-inspired dialogue-free sketches shot in a field.

But the format that would eventually become cult watching in the hands of the Monty Python team in the late 1960s, was a little premature for the audience in 1956 and Son of Fred was cancelled after eight shows aired of a planned 16.

It would be eight years before Spike Milligan would return to British TV with a full series.

Peter Sellers was contracted to do one more series for Associated-Rediffusion and returned in 1957 for Yes, It’s the Cathode-Ray Tube Show!