Although The Soupy Sales Show ran for only two years, from 1959-61, Sales – real name Milton Supman – had been performing his antics for nearly four years before this national show on ABC. He had begun his career doing local TV shows for the children of Cleveland and Cincinnati in the early 1950s.

In 1955, the television station WXYZ of Detroit gave Sales a fifteen-minute show as a summertime replacement for Kukla, Fran and Ollie. Shortly afterwards, Sales appeared on another WXYZ show called Comics.

This daytime show brought in better ratings than many of the network programmes, attracting such celebrity guests as Ella Fitzgerald and Duke Ellington.

While the daytime show was still running, Sales produced a late-night show called Soupy’s On. As a result of that show’s success, ABC, at last, gave Sales his first network show, The Soupy Sales Show.

It was produced in Detroit and ran for eight weeks. Sales then moved to Los Angeles, where he hosted a local show for a few more years.

The show featured Sales chatting with a menagerie of colourful characters, including dogs White Fang and Black Tooth, who, with the exception of an arm, were off-camera creatures.

Other characters included Marilyn Mon Wolf, Herman the Flea, Pookie the Lion, Willie the Worm and Hippie the Hippo.

But it was in New York in 1964 that Soupy achieved his greatest success. The show had gone into national syndication, and it was during this time that “the incident” occurred . . .

Sales told his kiddie viewers to go into their daddy’s wallets and remove “those little green pieces of paper with pictures of George Washington, Benjamin Franklin, Lincoln, and Jefferson on them, send them to me, and I’ll send you a postcard from Puerto Rico.”

This memorable moment in the celebrated career of Soupy Sales resulted in a one-week suspension from WNEW-TV. For seven days, the country was without Sales’ jokes, songs, silent films, puppets, and pie throwing, the true Sales staple.

The publicity generated by the joke gave the show an edgy image and made it cool for kids to watch.

Leaving his show to make the movie Birds Do It, Sales returned to TV as the host of the morning game show Junior Almost Anything Goes for a year.

In 1978, another Soupy Sales Show was created for syndication. Despite an effort to recreate the look and feel of the original show, this series only lasted for a year. 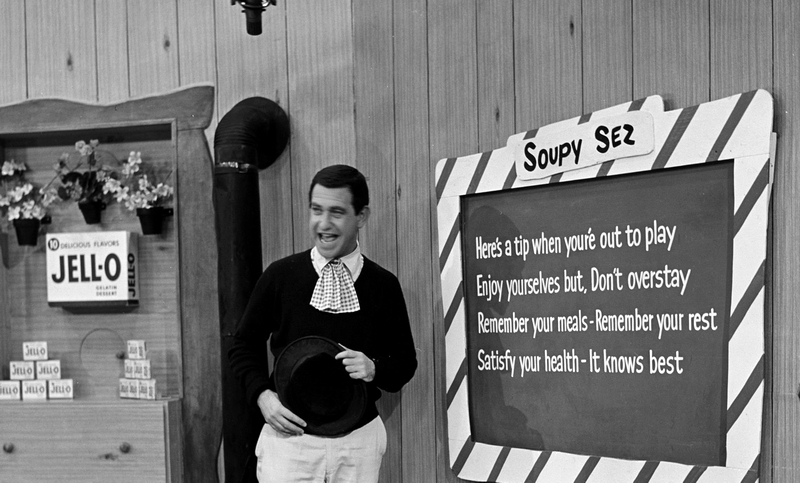 Sales went on to guest star on many game shows of the ’70s and ’80s, as well as on several variety shows, including a regular stint on Sha Na Na in 1978.

Soupy also worked into the ’80s, providing the voice of Donkey Kong on the animated series Saturday Supercade. Through the ’90s, Sales continued to work in syndicated radio, extending a legendary career into its sixth decade.

Clyde Adler – the man behind the many puppets on the show and Soupy’s assistant – passed away in 1993 at the age of 67.

Soupy Sales died on 22 October 2009 at Calvary Hospice in the Bronx, New York, aged 83, from cancer.