Regular ingredients of the show were the high-kicking Tiller Girls at the start, the game ‘Beat The Clock’ in the middle, and the famous ending where all the stars of the evening’s show would wave frantically and grin inanely from a revolve in the centre of the stage.

‘Beat The Clock’ was based on an American quiz show of the same name and involved married couples (picked from the theatre audience) playing silly games which they had to complete within a set time period with a chance of winning a £1,800 jackpot. 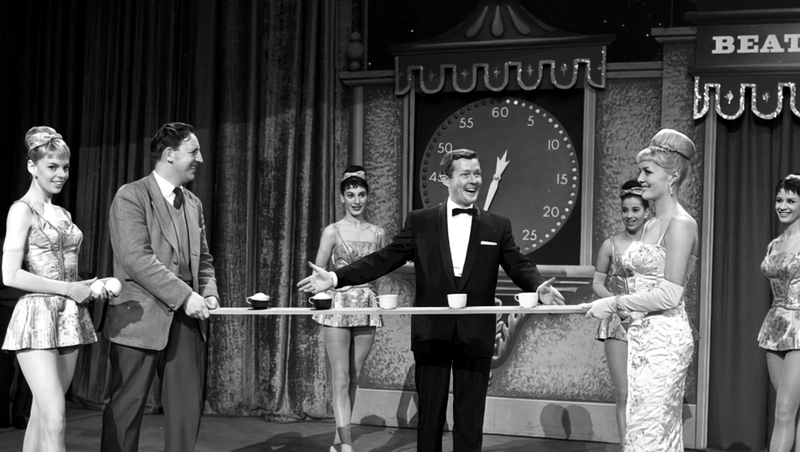 The centre-stage revolve caused many problems during the life of the show – Judy Garland was too emotionally upset to go on it, and in the 60s The Rolling Stones refused to go on it because it didn’t fit their rebellious image.

On one occasion when a power failure blacked out the ITV network, Trinder ad-libbed for two hours. His first words when the picture was restored were “Welcome to Monday Morning at the London Palladium”. The best known was Bruce Forsyth (pictured above) who took over in 1958. His handling of ‘Beat The Clock’ was sheer brilliance, and his catchphrase, “I’m in charge”, was the first of many he would use throughout his career.

There were many odd occurrences during the life of the show; Frankie Howerd caused protests by walking on stage with a Union Jack held upside-down; Mario Lanza accidentally punched his own bodyguard; Norman Vaughan dropped a rifle and nearly broke his toe and Harry Secombe fell through a trapdoor.

Jimmy Tarbuck made his debut in 1963 as an unknown 23-year old comic. He was meant to go on for six minutes and carried on for nine, causing Xavier Cugat and his band (who were topping the bill) to cut their act to make up time. Two years later, Tarbuck was the Palladium host. He once completely forgot Petula Clark‘s name and had to introduce her as “someone who needs no introduction”.

The Palladium’s Sunday night curtain was brought down for the final time in 1967 although it didn’t stay down for good.

In 1973 Jim Dale hosted a new series, but it failed to make an impact with the viewers and it lasted just the one season.

Jimmy Tarbuck returned with a little more success some years later but an attempt to revive it again in the year 2000, with Bruce Forsyth as compere, failed to win the approval of critics or viewers alike.

In its heyday, 28 million viewers tuned in, at the time nearly half the population of the United Kingdom. The stars that appeared on the show or ‘topped the bill’ reads like a who’s who of show business.