Black and White Minstrel Show, The

No doubt this BBC show would be condemned as terribly politically incorrect in this new and enlightened age with white performers ‘blacked up’, but The Black and White Minstrel Show was incredibly popular in its day (up there with The Good Old Days). The show certainly seems surreal in retrospect, but a gaggle of Al Jolson clones in traditional “blackface” was prime variety television back then.

Probably the most offensive thing about the show was the repertoire of old crap the group would trot out and sing every weekend. The sort of material that even Max Bygraves used to throw out . . .

Reflecting the American Deep South the songs would be about Mammy, The Swanee River or Old Black Joe, but as time went on the performances were seen as derogatory and politically incorrect and in 1978 the show was finally dropped.

The George Mitchell Minstrels had already enjoyed success on the West End stage when they featured in a one-off special called The 1957 Television Minstrels. The occasional television specials soon developed into a regular series with a forty-five minute non-stop format of Mississippi tunes and Country and Western songs. During the early years, various comedians such as Leslie Crowther, Stan Stennett and George Chisholm acted as compere, providing “filler” between the slick song and dance routines.

What accounts for such immense popularity?

Part of the explanation was undoubtedly the pleasure many got from the programme, with its meticulously choreographed dance routines and popular songs and melodies. Creator/producer George Inns combined white dancers with black-faced singers and this was believed to be visually striking, particularly when colour television was introduced in 1967.

The Black And White Minstrel Show harked back to a specific period and location – the Deep South where coy white women could be seen being wooed by docile, smiling black slaves, except in this case the black men were white artists “blacked-up.”

The racist implications of the premise of the programme were yet to be widely acknowledged or publicly discussed. But it was this which largely led to the programme’s eventual demise. 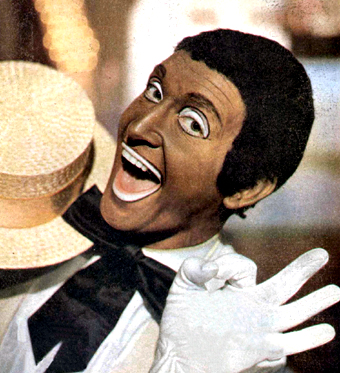 The show does have the distinction, however, of being the first-ever recipient of the Golden Rose of Montreux, an annual international contest for light entertainment that was organised by the Swiss Broadcasting Authority under the patronage of the European Broadcasting Union, in 1961.

On 18 May 1967, the Campaign Against Racial Discrimination delivered a petition to the BBC signed by both black and white people, which requested that the programme be taken off the television.

Despite the controversy, the programme continued until 1 July 1978. Ultimately, its removal from the air coincided with the demise of the popularity of the variety genre on British television.

The live show Memories of the Black and White Minstrels toured the UK to packed houses in 2004 and 2005. The show was performed white-faced and featured the stars, medleys and costumes from the original TV series.

Thanks to Chris Gidney