The Woodentops joined the line-up of Watch With Mother on 9 September 1955 – It was Friday’s offering on the show, and was brought to the screen by the same team responsible for Andy Pandy and The Flowerpot Men.

The Woodentops were Daddy Woodentop (seldom seen with a shirt on his back), Mummy Woodentop (so busy in the kitchen that she needed daily help from Mrs Scrubbitt), high-pitched twins Jenny and Willy Woodentop and, completing the family, Baby Woodentop, still in his mother’s arms.

Also seen was Sam, the man who helped Daddy Woodentop in the garden, as well as Buttercup the cow and a rascally hound, appropriately named Spotty Dog (in fact “the very biggest spotty dog you ever did see”). 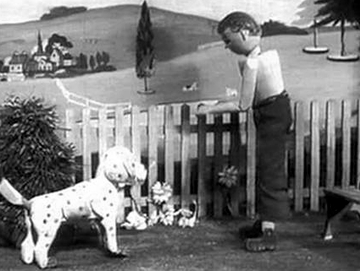 With action thin on the ground, the best that toddlers could hope for was Jenny or Willy getting into a scrape and being late for dinner, or Spotty taking the odd liberty with his caring owners.

All ended well, however, and the whole “cast” waved goodbye over the closing credits.

Once again, Audrey Atterbury and Molly Gibson pulled the strings.

Episodes were made in a tin shed at Lime Grove and, like the other Watch With Mother programmes, were shot on film as they were intended for constant repeat use.

The puppets, preserved by the BBC, were stolen, along with Bill and Ben, in 1983. They were missing for a year until spotted on a shelf in Phillips’ auction room in London by a member of the Blue Peter production team.