77 Sunset Strip was the show that started the young, cool private detective craze of the early Sixties.

This Warner Brothers series was so big that the studio had several clones of the show drawing big ratings for the networks well into the 1960s.

Their brand-new sports cars shared a driveway with a swinging nightspot called Dino’s Lodge, a rat pack type hangout that was an important source of trouble (and chicks) for the boys.

Other series regulars were Roscoe (Louis Quinn), the racetrack informant that liked to hang out with the guys, and Suzanne (Jaqueline Beer), the detective agency’s sexy French receptionist. 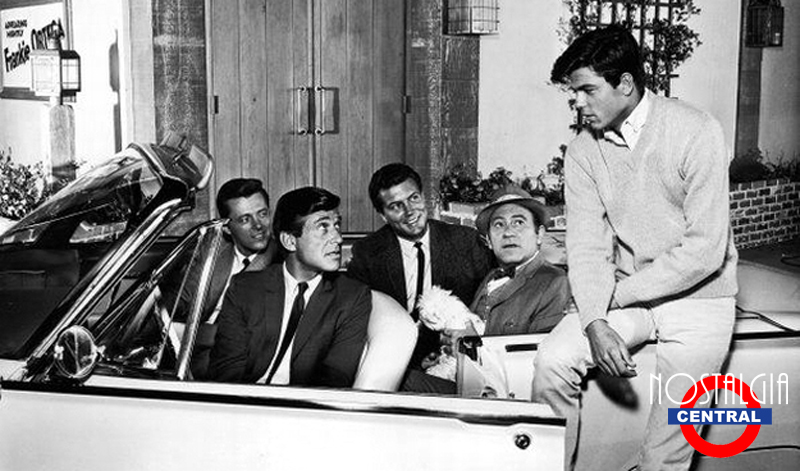 Parking the cars at Dino’s was Gerald Lloyd Kookson II (Edd Byrnes) – aka Kookie – who snapped his fingers in beatnik style all the way to genuine teen idol status. Hep talking Kookie wanted to help the guys solve crimes but rarely found time to do more than pose, thrust his hips and comb his hair.

Kookie had his own way of talking: “That chick’s the ginchiest”, “A dark Seven” (a bad week), “Let’s peel from this gig”, and piling on some Z’s” (sleeping).

Suddenly the nation’s teens all wanted to be like Kookie, and Byrnes and Connie Stevens had a huge hit song in 1958 with Kookie, Kookie, Lend Me Your Comb (featured on the second episode).

Edd Byrnes walked off 77 Sunset Strip during the second season, demanding a bigger part on the show and more money.

He was replaced by Troy Donahue as a long-haired intellectual type that parked the cars for Dino’s. Producers eventually gave in, and Donahue was sent packing.

By the third season, Kookie was back as a full partner in the detective agency. Replacing Kookie in the parking lot was J.R. Hale (Robert Logan), who also had his own language – he spoke in abbreviations, man.

Rex Randolph (Richard Long) of Bourbon Street Beat – the least successful of the many cloned 77 Sunset Strip detective shows churned out by Warner Bros for the ABC network – also joined the agency for one season.

The show was created by Roy Huggins as a segment for a show called Conflict. Huggins later wrote such classic television shows as The Rockford Files, Alias Smith and Jones, Maverick and The Fugitive.

A radical change took place when the show entered its sixth season. The production was turned over to Jack Webb (Dragnet) and William Conrad (Cannon), who dumped all of the regulars except Stu Bailey.

Stu left the glamorous surroundings of West Hollywood for a career pursuing international spy cases. Gone were Dino’s bar, the jazzy beatnik music and even the Sunset Strip itself. The tone of the show also changed, from goofy escapism to bleak, violent hard-boiled pulp.

Abysmal ratings followed, and the show was cancelled in February 1964, with re-runs featuring the original cast playing out the summer.